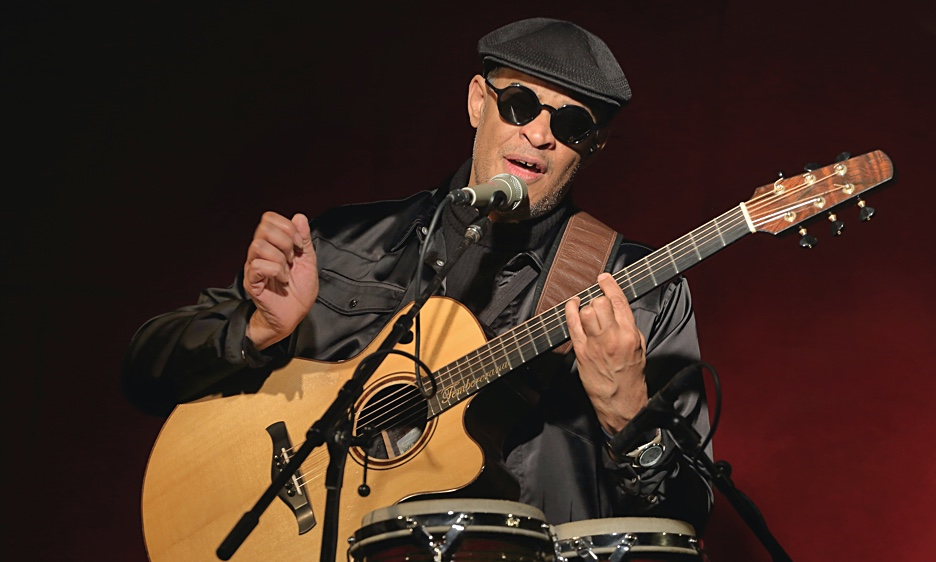 By John Pietaro
June 21, 2020
Sign in to view read count
Leaning into the tenacious chordal structure of "Bad Ass and Blind," Raul Midon's surging flurries, stinging dyads and whirling solos over nylon strings speak with artful determination. His vocals and guitar in aerial unison can be intoxicating. In his voice one hears terse vibrato, a searching, spiritual tone and the strain of hardship. Celebrated. For the concertgoer recognizing that the artist on stage—who also does uncanny 'trumpet' vocalizations and plays hand drums—is sightless, the experience becomes awe-inspiring. "There's not a lot of good to being blind," Midon jokingly explains, "but as I never got to see anyone else perform, I just did it all myself."

From his origins in a small New Mexico town to the world stage and Grammy nominations for Best Jazz Vocal, one can't help but call Raul Midon's journey 'visionary.' The relevance of sound and touch greatly impacted Midon as a child when first exposed to the drum via his father, a folkloric dancer. The guitar entered his life through a school program and musical pursuits developed during his teen years. First drawn to the flamenco music in his immediate surroundings, the young guitarist absorbed the techniques largely by osmosis, "but I wasn't aware that traditional flamenco was only played with the first three fingers (of the right hand), so I use them all." Midon entered the esteemed music program at the University of Miami, alma mater of Pat Methaney, Jaco Pastorius and many more, in 1984. "Man, for me it was great. I had teachers who recognized that I learned in a different way." He buried himself in studies and made transcriptions of noted jazz solos, hence the development of his 'trumpet' vocalizations. In this period, Midon listened to a wide range of music, from jazz and R&B to world music and rock, in particular Steely Dan. The latter left an indelible mark on his concepts of production and songwriting, but especially the literary references found in Becker and Fagen's lyrics. "Steely Dan led me to the writings of the Beats and particularly William S. Burroughs' Naked Lunch. In the '50s, America was the top of the world— for certain people. The Beats were a precursor to what occurred in the 1960s."

Performing locally in Miami, Midon's catalog of original music grew while he sustained an income singing on Latin music sessions, those for Jose Feliciano, Shakira and Julio Iglesias among them. "I learned a ton in the studio and recognized that its where I wanted to be. Most of the music was pop or commercial jingles, but I enjoyed it for a time." However, his trajectory was also becoming clear. "Many people see themselves as being of a certain genre, but I've never wanted to be in a box."

Bored with the limited scope, in 2001 he toured as a backing vocalist with Shakira. "I had a little Backpacker guitar which I played whenever I had downtime. Most producers had no idea I even played guitar, but Phil Ramone approached me to ask if I had a record deal. But I'd gotten a BMG deal by then." Though his guitar playing may have been a mystery to some, Midon had been immersed in the instrument through the years. "Lenny Breau was a big influence on me. His pianistic approach was so unique" and was thusly incorporated into the heart of Midon's own playing and in turn, composition.

As the Shakira tour came to a close, Midon settled in Midtown Manhattan. In the whirlwind of considerable culture shock, he was also close enough to the business to interact with legends like Arif Mardin, one of the three leaders of Atlantic Records' glory years. Mardin not only signed the budding star to a contract but became his guiding force. "My guitar playing and way of approaching music wasn't conventional. Most producers looked for things to change in me, but Arif said 'We must record you in the best way possible.' I was lucky enough to be the last one he produced and the only one he ever signed. He came over to Blue Note's Manhattan Records imprint and brought me along." Midon's major label debut, State of Mind, was released in 2005 to critical acclaim. On it, he incorporated the traditional sounds of his youth within a cornucopia of R&B stylings. Stevie Wonder was a guest performer on the album. "He was an important inspiration to me. Stevie was even more extraordinary than we knew; his decision to embrace the civil rights movement, in opposition to Berry Gordy, was the right decision. Knowing what I know now, I recognize how important it was," he reflected.

Sadly, Arif Mardin died not long after the album's release, but Midon continued moving forward. "I got a call from Herbie Hancock and was absolutely shocked; he wanted me to sing on one cut of his new album." Hancock's Possibilities (Vector, 2005) featured a bevy of noted vocalists and when the legendary pianist told Midon he wanted to record a Stevie Wonder song, the younger man felt it was fate. "But when he said we were going to do "I Just Called to Say I Love You," I was disappointed. I thought, "Damn, why not "Living for the City" or "You Haven't Done Nothin"'??." The session proved difficult as Midon attempted to capture the spirit of Wonder's hit, "but then Joe Mardin (Arif's son) told me to imagine that the call was left unanswered. I thought they just wanted me to sound like Stevie, but then that's when the magic happened." The end result is a moving, aria-like work with expansive harmonies and trademark Hancock piano improvisations. Over the next few years Midon recorded another tribute to a major vocal influence, Donny Hathaway, and then partnered with one more, Bill Withers, with whom he wrote "Mi Amigo Cubano." "I don't normally write in Spanish but wouldn't say no to Bill Withers."

By 2010 Midon's album Synthesis (Decca) included jazz and session heavies such as drummer Vinnie Colaiuta, guitarist Dean Parks, keyboard player Jamie Muhoberac, organist Larry Goldings, percussionist Paulinho DaCosta and bassist Larry Klein, who also produced. The foray into jazz continued when, in 2014, he released the live Don't Hesitate (Mack Avenue/Artistry) with special appearances by Diane Reeves, bassist Marcus Miller, gospel singer Lizz Wright and bassist Richard Bona. "I loved working with all of those guys though I probably couldn't afford to keep doing it," he added, laughing. But even when playing solo, the guitarist has earned serious props from jazz artists. His rapid-fire performance of "Giant Steps," tearing through all twelve keys with nary a breath, earned well over a million views on YouTube. Midon's following releases were realized with jazz musicians and in 2016 his touring band, which played the Monterey Jazz Festival, counted pianist Gerald Clayton, trumpet player Nicholas Payton, drummer Gregory Hutchinson and bassist Joe Sanders in its ranks. 2017's Bad Ass and Blind included these artists as well as drummer Lionel Cordew and bassist Richard Hammond.

The album, which brought Midon to the attention of countless listeners, was nominated for a Grammy Award. "It was a huge shock. Our publicist called at 8:30am from the subway screaming! Then in 2018 we were nominated again for the next album (If You Really Want). Ironically, the record company hesitated giving approval on this one as its orchestral: expensive to record and made touring prohibitive. But I told them they were wrong and insisted it would be Grammy-nominated." If You Really Want was duly nominated. Recorded in the Netherlands with the esteemed Metropole Orckest, the selections were orchestrated and conducted by Vince Mendoza. Midon's 2020 release, The Mirror traverses the genres and adds two powerful spoken word pieces included. Guests include vibraphonist Joe Locke, pianist John di Martino, bassist Boris Kozlov (Mingus Big Band) and drummer Vincent Cherico (of Ray Barretto and Arturo O'Farrell) as well as Janis Siegel of the Manhattan Transfer. Within the poetry, Midon directly addresses his blindness ("If I could see/I would walk alone sometimes"), contemplates a day without war ("how many lives would be saved/what revolutionary ideas would emerge?") and within the confines of a love song, seeks peace and boldly confronts "a commander-in-chief with shit for a brain/with love we can conquer the shame." "We live in an era of noise," he contemplated. "As music creators we must speak out and keep working. And make the system work for us!"