By Matthew Warnock
February 7, 2010
Sign in to view read count 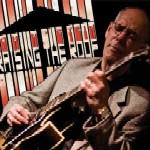 Raising the Roof is a hard-swinging and thoroughly enjoyable album by Boston-based guitarist John Stein. Featuring an all-star quartet, with keyboardist Koichi Sato, bassist John Lockwood and drummer Zé Eduardo Nazario, the group plays together with a sense of cohesion that borders on the realm of ESP. While this level of communication and familiarity is to be expected by world-class jazz musicians such as these, what is surprising is that they were able to play in this fashion with such a quick rehearsal and recording schedule, another testament to their masterful musicality.

The tunes are a mix of freshly-arranged jazz standards and Stein's original compositions. Stein's arrangements stick fairly close to the original composers' intents, but go beyond the realm of simple head charts. A master of subtlety, as both a player and writer/arranger, Stein finds small ways to breathe new life into these classic jazz tunes.

One of his favorite ways to put a personal stamp on a standard is through his use of unexpected rhythms and grooves. "Nica's Dream," which is taken at an unexpectedly fast swing tempo, along with the oft-played "Moanin,'" which features a hard-driving brush groove by the Brazil-based Nazario, are examples of refreshing arrangements that don't lose touch with the composer's original intent.

Stein guitar playing on Raising the Roof is simplistic in the best sense of the word. Modern jazz soloists, especially guitarists, are often guilty of overplaying and of making the music complex for the sake of being so, something that has simultaneously raised the intellectual level of the music and isolated the general audience.

Stein's playing is simple in the way that Jim Hall's playing is simple. There is a solid focus on the melody, his love of rhythmic variety is immediately evident and above all, any advanced harmonic or melodic application is done with the greatest care and utmost intent. Stein never plays a line or phrase because his fingers tell him to; every line and chord has the sense of being carefully chosen and played with the utmost intent and precision.

There's a strong sense that his ears are guiding his notes, not his technique, which is something that can only come from spending as many years on the bandstand as Stein has. Using all of these approaches, Stein draws his audience in, allowing it to be a part of the music—something of a lost art on the jazz scene in recent years.

Raising the Roof is not going to reinvent jazz or change the way people think about jazz guitar. What it will do is provide an hour of musical enjoyment for musicians and non-musicians alike. Far too often jazz is criticized because the musicians seem to be creating music, either for themselves or the enjoyment of other jazz musicians.

Stein successfully keeps the music intellectually relevant, while at the same time enjoyable and broadly accessible; not an easy feat to accomplish in any musical genre.