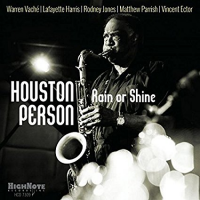 Tenor saxophonist Houston Person, now in his eightieth decade, has made no concessions to Father Time, choosing instead to use his many years in the jazz trenches to forge a style all his own, bathed in blues and soul but never turning a deaf ear to the allure of a seductive and tasteful melody. Each of these components is clear as the midday sun on Rain or Shine, a well-designed studio session on which Person shares the front line with the like-minded cornetist Warren Vache.

There can be no doubting a leader's self-confidence when he not only opens his own gig with an even-tempered ballad ("Come Rain or Come Shine") but entrusts the tune's lone solo to his fellow horn man. That is exactly what Person does, unlimbering his keen improvisational chops on the next track, "132nd and Madison," and pretty much taking the reins from there on. That's not meant to imply that Vache doesn't have his moments—he fashions engaging solos whenever called upon, as do guitarist Rodney Jones and pianist Lafayette Harris who with bassist Matthew Parrish and drummer Vincent Ector comprise the ensemble's deft and responsive rhythm section.

Besides the songs already mentioned, the bill of fare embodies a mixture of soul, funk, R&B and ballads, with the blues never more than a glance away, before closing with an eloquent reading of the Irish folk classic, "Danny Boy" (by Person and Harris). Jones wrote the funky "Soupbone," which precedes the ballad "Never Let Me Go" and "Our Day Will Come" (set to a bossa beat) and follows "Everything Must Change," "I Wonder Where Our Love Has Gone" and the Frank Sinatra favorite, "Learnin' the Blues" (which swings as hard and as freely as Ol' Blue Eyes' original to amplify snappy solos by Person, Vache, Jones, Harris and Parrish).

Rain or Shine was recorded in June 2017, one month before the passing of producer Joe Fields who founded the Muse and Xanadu labels, among others, before co-founding HighNote and Savant Records with his son Barney in 1996. If this was the last recording that Fields produced, he did indeed end his lengthy career on a decisive HighNote.

Come Rain or Come Shine; 132nd and Madison; Everything Must Change; Learnin’ the Blues; I Wonder Where Our Love Has Gone; Soupbone; Never Let Me Go; Our Day Will Come; Danny Boy.