By GLENN ASTARITA
September 30, 2009
Sign in to view read count 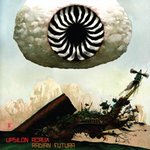 Radian Futura is this Southern California-based quintet's sixth album, and is steeped within multipart metrics, engineered upon an astonishing range of odd-metered time signatures. The band's explosive gait summons, at times, notions of a hyper-mode spin on the common man's vision of progressive-rock, amid guerrilla tactics and daring, rock-in-opposition type proclivities.

Upsilon Acrux conveys the utmost in discipline and regimentation via these intensely executed compositions. Moreover, the musicians dish out a labyrinth of captivating perspectives with swirling unison choruses and the guitarists' seething crunch chords. Their modus operandi involves a constantly shifting paradigm of resonating prog-rock frameworks, also including the rhythm section's driving backbeats. With thrusting grooves, and split-second deviations, the group also throttles back the pulses, and then revs it all up akin to a drag racer getting the green light.

It's a unit that lives on the edge, as the group implements a few scare tactics, while occasionally tempering the flow with ethereal passages in such a way that might hint at contemplation, or a method of regrouping. However, the twenty-eight minute "Transparent Seas (Radio Edit)," is the ensemble's magnum opus, in which Phil Cobb's melodic and quasi-psychedelic keys intimate a drifting theme. Yet the artists gravitate towards a climactically driven sequence of events, marked by swirling and tumultuous movements, and amplified by Chris Meszler's monstrously polyrhythmic drum solo.

The program seemingly proceeds at the speed of light, and its not casual listening by any stretch. Like a cinematic action-packed thriller, the storylines become increasingly involved as the plot contracts and expands. Either way, it's a mesmeric journey into a vastly populated musical wonderland.