By John Kelman
September 30, 2009
Sign in to view read count 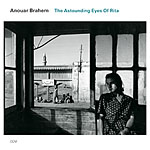 In the world of the oud—the fretless, Middle Eastern incarnation of the lute—there are three artists who are moving the instrument—and its centuries-old tradition—forward. Tunisian-born Dhafer Youssef has explored the integration of technology and western classicism on Divine Shadows (Jazzland, 2006), while Lebanese-born Rabih Abou-Khalil has investigated a nexus with horn-driven large ensemble on The Cactus of Knowledge (Enja, 2001). Anouar Brahem, since first emerging on ECM with Barzakh (1991), has explored more nuanced territory, between his longstanding Astrakan Café group and projects like Thimar (ECM, 1998), where Middle Eastern linearity and Western harmony were conjoined, and the chamber setting of Le Voyage de Sahar (2006), which owed as much to the turning point of European romanticism to contemporary classicism as it did Brahem's undeniable Tunisian roots.

The Astounding Eyes of Rita introduces a new group and a consolidation of past interests. Featuring an international quartet—with two familiar faces to recent ECM fans—its dark, low register-heavy landscape is inherently chamber- like. Still, with an electric bassist and percussionist, this collection of eight Brahem compositions returns to more defined rhythms and vivid Middle Eastern traditionalism, even as it uses group interaction to lend it unmistakable modernity.

Manfred Eicher has often been instrumental in suggesting new groupings of musicians associated with the label; here he creates a truly inspired first-encounter with bassist Björn Meyer and clarinetist Klaus Gesing. Meyer—a key participant in pianist Nik Bärtsch's "Zen funk" group Ronin and the remarkable Stoa (2006), pushes Brahem's music with a similarly unshakable pulse on the joyous "For No Apparent Reason" and brooding "The Lover of Beirut," but his touch, overall, is lighter, his support more nuanced. Gesing, last heard on British singer Norma Winstone's sublime Distances (2008), is no less striking here, though by working solely with bass clarinet the result is a beautifully synchronous mesh with the oud's lower register, especially so during the floating melody over the title track's slow groove. Lebanese percussionist Khaled Yassine, introduced to Brahem by the oudist's sister-in-law, rounds out the group and adds subtle drive to the music, especially on the optimistically up- tempo yet still understated "Stopover in Djibouti."

Brahem's improvisational prowess has always been in service of the music; here, his ability to blur the line between form and freedom has reached a new level, egged on, undoubtedly, by his band mates' equal abilities. The music is, by design, about strong melodies and open-mindedness when it comes to expanding on Brahem's core ideas. Gesing, in particular, is a strong foil for Brahem, matching the oudist's ability to evoke with the slightest of bends, the subtlest of glissandi.

It's this very specific combination of musicians that makes Brahem's album so successful. After two discs of sparer chamber music, it's great to hear Brahem back with a pulse; but with Meyer, Gesing, and Yassine as partners, he's retained the elusive mystery of albums like Le Pas du Chat Noir (2002), making The Astounding Eyes of Rita his most aesthetically unified album to date.