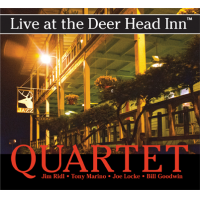 A few months ago, I discovered the Deer Head Inn at the Delaware Water Gap.. That led to discovery of Deer Head Records. Which led to the discovery of this recording. Sometimes, ignorance can lead to bliss.

I hadn't heard much of Joe Locke, and aside from Bill Goodwin, the other musicians were unknown to me. I clearly don't get out enough.

This is, no exaggeration, a spectacular recording of a group put together for, I guess, one night. When you listen to the live set, all you can think is, consummate pros, all of them. To record something this simpatico with no rehearsal tells you all you need to know.

My first reaction was "I think this is a great recording," but I'm prone to enthusiasms. I also had trouble counting some of the tunes, which is not unusual. So I asked my friendly local bop drummer, a guy named Willis Salomon, if he could confirm my instinctive reaction, not to mention give me some clue as to meter. He got back to me and said, in not so many words, yeah it's great. Goodwin and Locke are great. They're all great and jazz is in good hands even if no one is paying much attention these days. Willis told me to think six and four, compound meter and straight swing. On a long, long road trip from San Antonio to Abilene, Texas, I did just that. I arrived in Abilene sort of high. These guys will do that to you.

I was unfamiliar with Donald Byrd's Tanya and Bobby Troup's Meaning of the Blues. Both are great tunes, and both feature very hip solos by everyone concerned. Equinox sneaks up on you by starting out with a countermelody as an introduction, but I found myself much absorbed. Yet the highlights of the recording are Midnight Sun and I Love You.

When Locke strikes the tonic for Midnight Sun, you are off on an adventure, polyrythmic, inventive, and very moving. I found myself listening to the interplay of Locke, Goodwin, Jim Ridl and Tony Marino with some awe. The 6/4 and 4/4 stuff really builds to climax after climax, and Ridl's solo made me think of some combination of Lou Levy and Bill Evans, if that's even possible. I kept asking Tony Marino to clue me in: where are you guys? The bassist is going to tell me. And he does. And Goodwin pushes these guys hard, but almost never too obtrusively. I suspect he was too close to a mike, but it's live music and that's the price you pay for excitement.

I Love You, the final track, is taken way up, and Joe Locke virtually explodes into his last chorus after noodling around chromatically for a sort of stop time thing. I was transfixed. No other way to describe it. Is there a more imaginative or inventive player around these days? I want to hear him or her.

Bottom line, this recording is gem and I wish I had been there when these guys made it. Texas is a big state, and they kept me from noticing that from San Antonio to Abilene, there isn't much other than ranches, cotton, and cattle. It's a long ride, but I'd make the drive in the company of this band any time. It's a challenge to the ears, it's joyous in the sense of discovery, and if it doesn't move you, well, that's your problem.

Tanya; The Meaning of the Blues; Equinox; Midnight Sun; I Love You