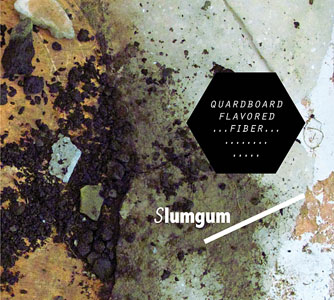 While it's true that a really great band is capable of expanding its listeners' musical vocabularies, it turns out that this LA-based quartet's name is also a vocabulary-builder in the literal sense. Slumgum is actually a real word that refers to the waste products from beekeeping operations. Those with the good fortune to hear either of Slumgum's recordings (Quardboard Flavored Fiber is the band's second) or catch the band live stand the chance of obtaining a mind-expanding double-whammy. This quartet of CalArts graduates specializes in the sort of original modern jazz that maintains an unshakable eye towards to the future while acknowledging, and drawing upon, the music's storied past.

Listening to "Eshu's Trick," for example, it's not hard to imagine these guys huddled next to the turntable, listening to trumpeter Miles Davis' Miles Smiles (Columbia, 1965)—rapt, drinking it all in. That said, there's very obviously something else going on here. Trevor Anderies' drumming has hints of drum 'n' bass, though it also has the melodicism of Max Roach or Roy Haynes. Rory Cowal's Rhodes piano growls and chimes, while Jon Armstrong's inventive tenor steers the group into uncharted territories, a completely new, fugue-like melody appearing before the tune abruptly ends.

A lot of the compositions on Quardboard Flavored Fiber are like this, taking strange and unexpected turns or exchanging foreground for background right in the middle of a solo, or right before the tune's end. Tenor sax and ice-cold Rhodes negotiate the lengthy, highly detailed theme that reappears in various permutations during Cowal's solo on "Hancho Pancho," though the tune abruptly shifts into an effects-laden, frenzied rocking groove for Armstrong's big-toned solo. The title track alternates high energy, rockish passages featuring Armstrong's honking tenor with ballad-like rubato sections featuring Cowal's almost florid piano. The rubato sections grow in length and build in intensity with each iteration, eventually providing the actual basis of the piece. Dave Tranchina's "Puce Over Pumpkin with a Hint of Lime" investigates musical territories first inhabited by the pre-Bitches' Brew (Columbia, 1969) Miles Davis Quintet—Armstrong's breakout tenor solo accompanied, at first, only by walking bass is the sort of thing that the trumpeter used to arrange. Cowal solos over Anderies' Tony Williams-like groove before the tune dissolves into a freeform exploration that goes from pensive ECM-like musings to blistering post-Ayler expressionism and back.

Not all of Slumgum's music is brash, youth-oriented stuff. Cowal's "Afternoon" is a beautifully lush, somewhat amorphous ballad that swells into a moderate-tempo waltz, topped by Tranchina's sweet bass solo and Cowal's own meditative piano. This tune bleeds into Anderies near-ambient "Big Fun (Natural Liberations)," one of a set of six relatively brief sketches that provide bridges between the band's incredibly diverse all- original repertoire.

Quardboard Flavored Fiber is equally impressive and inspired. Slumgum's compositional and instrumental abilities put it in the very top echelon of forward-looking, up-and-coming jazzers, along with bands like Mostly Other People Do the Killing, The Bad Plus, and The Nels Cline Singers. While the band's name and the CD's odd title might suggest a scruffy, underground orientation, there is nothing scruffy about its music.