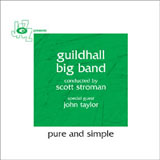 It would be easy to call Pure and Simple a John Taylor project, since all the charts are his and he's a featured soloist on every track. But, as was the case with the Australian Jazzgroove Mothership Orchestra's The Mothership Plays the Music of Mike Nock (Jazzgroove, 2006), that would be a mistake. As part of CAM Jazz's CAM Jazz Presents series, aimed at creating exposure for some of today's younger jazz talents, it's important to delineate this as an homage by the young Guildhall Big Band, with Taylor featured as guest pianist.

Britain's world-renowned Guildhall School of Music and Drama has provided a fertile, multidisciplinary training ground for creative young artists since 1880, boasting high profile music teachers including Taylor himself. Taylor's big band arrangements, first premiered in 2004 at the UK Cheltenham Festival, are thoroughly contemporary charts that would challenge any big band. That this group of students tackles Taylor's music with such aplomb and élan lays waste to unfounded claims that the death knell has rung for jazz in recent years.

A clear torch-carrier for legendary pianist Bill Evans, Taylor has advanced his own considerably denser approach to harmony. It's that very density that creates a strong foundation for the six titles arranged here, which date back to his 1970s Azimuth days with trumpeter Kenny Wheeler and singer Norma Winstone ("O, "Sirens' Songs, "Windfall ), but also run as contemporary as the title track—often-covered, but first appearing on drummer Peter Erskine's You Never Know (ECM, 1993)—and "Soldiering On, from the Taylor's Overnight (Sketch, 2002), with Wheeler and bassist Ricardo del Fra.

In some cases the charts wind through considerable twists and turns. The seventeen-minute "Quatorze, the only song written with a large ensemble in mind, is an episodic tour de force filled with vivid counterpoint, shifting feels and a compelling drop-out point that features some outré free interplay between trombonist Tom Woolley, altoist Mike Chillingworth and trumpeter Geoff Bartholomew before returning to terra firma. It's also a strong solo vehicle for a number of Guildhall band members, most notably baritone saxophonist Rob Downing, drummer Andrew Chapman and tenorist Tom Challenger.

That Taylor is the only one to get a solo on nearly every track alludes to the high esteem conductor Scott Stroman and the entire big band hold for a pianist whose significance continues to grow with every passing year. Taylor's charts and participation are undeniably essential to Pure and Simple, but so too is the inescapable way that this outstanding young big band has made Taylor's modern big band charts come alive with a personality all its own.