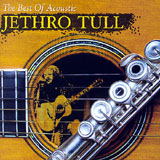 Most often remembered as the classic rock group responsible for mega-sellers including Aqualung (Chrysalis, 1971) and Thick as a Brick (Chrysalis, 1972), Jethro Tull has always included acoustic instrumentation as part of its musical palette. "Locomotive Breath and "Cross-Eyed Mary may be what comes to mind when asked to describe Aqualung. Still, "Cheap Day Return, "Mother Goose and "Wond'ring Aloud are all completely unplugged tunes that give that album scope beyond thundering riffs and arena-rock attitude, and make The Best of Acoustic Jethro Tull the kind of collection that few (if any) other progressive rock acts could compile.

Even at its most electric, Tull has always reflected an allegiance to the British folk tradition. Once founding member/multi-instrumentalist/vocalist/songwriter Ian Anderson emerged as the group's clear leader following its more blues-oriented debut, This Was (Chrysalis, 1968), the group immediately began integrating traditional elements. The image of Anderson as the flautist who plays on one leg may be his most enduring, but Tull in performance makes it clear that acoustic guitar is an equal companion to the singer.

The majority of the songs have been available, albeit in some cases only in expensive box sets or as bonus tracks on remastered/expanded editions of Tull's discography. Two previously unreleased songs—an alternate version "One Brown Mouse, from Heavy Horses (Chrysalis, 1978), and the Renaissance-like "Pastime With Good Company —might be reason enough for the completist to check this compilation out. Collector pathology aside, The Best of Acoustic Jethro Tull is a thoroughly enjoyable listen, even if the lion's share of the material is familiar. Hearing this more finessed material grouped together paints an entirely different picture of Tull, even for its most committed fans.

The highlights are many—including the poignant "Life Is a Long Song, pastoral "Jack in the Green, Baroque-ish "Velvet Green and rhythmically charged "Jack Frost and the Hooded Crow —but there are a couple of missteps. While Thick as a Brick has to be represented, the shortened edit of its first few minutes suffers from a forced fade out coming at an admittedly necessary point, given the electric jolt about to come. The inclusion of just over a minute of "Cold Wind to Valhalla, from Minstrel in the Gallery (Chrysalis, 1975), makes no sense—over before it's begun and unnecessary, given the inclusion of that album's "One White Duck/010=Nothing at All.

One might also question the inclusion of two tracks from Anderson's The Secret Language of Birds (Fuel, 2000) and Rupi's Dance (Fuel, 2003), since they're not strictly Tull tunes. Still, with the exception of longstanding guitarist Martin Barre, the group's revolving door of personnel has always suggested that Ian Anderson is Jethro Tull. Historical inaccuracy and a couple of questionable edits do nothing to take away from The Best of Acoustic Jethro Tull—a compelling collection that rightly focuses on a side of the group that many mistakenly consider to be secondary to its real mission statement.