By John Kelman
November 5, 2010
Sign in to view read count 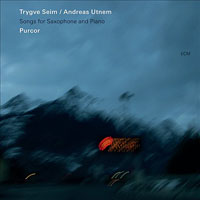 Since emerging on the label with his own large ensemble and as part of the collaborative, more improv-heavy group The Source, saxophonist Trygve Seim has been a leading voice in the second wave of Norwegian artists who look to legacy ECM musicians like Jan Garbarek, Arild Andersen and Terje Rypdal as touchstones, but possess unmistakable voices of their own. Albums like the superb Sangam (2005) spotlighted Seim's distinctive compositional approach, taking the unorthodox instrumentation of Edward Vesala (with whom Seim collaborated) as a starting point, but intentionally avoiding the more chaotic turns of recordings like the late Finnish drummer's overlooked gem, Lumi (ECM, 1987). Contrasting Sangam's emphasis on composition over improvisation, The Source (2006) showed Seim to be a thoughtful and careful improviser, one as concerned with the timbral purity of every note as he is the actual note itself.

Like Seim's last recording, 2008's Yeraz, which teamed the intently focused saxophonist with intrepid Norwegian accordionist Frode Haltli, Purcor: Songs for Saxophone and Piano is an intimate duo recording, this time with pianist Andreas Utnem. Utnem is a relatively fresh face on the Norwegian scene, for whom neoclassicist Ketil Bjornstad (another ECM artist), is a clear marker. Despite speaking clearly of Seim and Utnem's shared identity, there's at least a superficial suggestion, here, as to how a meeting between Garbarek and Bjørnstad might sound, though there's always been something slightly warmer, and less pungent about Seim's tone, especially in the lower register of his tenor.

That Purcor was recorded at an Oslo church, rather than a recording studio, makes perfect sense: the recital-like and deeply spiritual nature of this collection of deceptively simple originals, traditional tunes and improvisations benefits from a third member to the group: the sound of the church, itself. The resonance of certain notes, in particular, speaks to the personality of the room—an all-too-often lost aspect of today's DIY approach to home studio recording that's always been anathema to ECM's overarching aesthetic.

Utnem's spare, lyrical writing possesses some of the understated majesty of a composer like Erik Satie, especially on songs like "Credo," but there's a religious sensitivity here that's antithetical to the atheist, humanist Frenchman. Seim only contributes two tunes, but in their somber, almost meditative nature, they represent a logical evolution: "Responsorium," of Sangam's "Prayer"; and "Bhavana," of Different Rivers' sublime highlight, "Breathe."

Seim may specifically eschew overt improvisation—at least, the kind of muscular, testosterone-filled pyrotechnics favored by some—but on Purcor's three spontaneously created tracks, he proves, along with Utnem, to be a remarkable drawer of song from ether. Both "Præludium" and "Gloria" are Purcor's brightest, most fervently optimistic tracks, while the mournful "Postludium"—one of two tracks where Utnem switches to harmonium—ebbs and flows with understated power...surprising, given its harmonic stasis.

All three prove Seim and Utnem to be improvisers more interested in the end than the means, a general modus operandi of the alluring Purcor. Soft and nuanced, with nary a dissonance to be found, it's one of ECM's most consistently beautiful records in years.