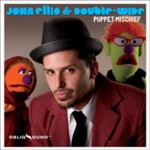 Saxophonist John Ellis is slowly but surely distinguishing himself as a notably singular figure in contemporary jazz. Establishing a firm foundation for himself as a tenured accompanist to 7-string guitarist Charlie Hunter, the North Carolina native and current resident of Brooklyn embarked on his solo career in authoritative style with One Foot in the Swamp (Hyena, 2005), and then conceived the ingenious Double Wide ensemble, the unusual lineup of which may not have wholly defined itself on its debut, but crystallizes completely on this follow-up.

Puppet Mischief is, in line with its humorous title, an absolutely delightful album. Much of the air of gaiety that permeates the music derives from the presence of Gregoire Maret, but the harmonicist only builds upon the foundation of low-key jubilation set by the bandleader and the rest of the group. The absence of a conventional bass instrument—electric or acoustic—seemed an oddity on Dance Like There's No Tomorrow (Hyena, 2008), but here it becomes a distinction. Matt Perrine plays sousaphone in such a way his low notes permeate the rest of the instrumental interaction like a sort of sonic lubrication, so that Ellis' horn lines fly over the top and Jason Marsalis' drum lines scoot right along on "Okra & Tomatoes."

Trombonist Alan Ferber adds to the palpable New Orleans atmosphere that permeates Puppet Mischief too, but his guest spots—here and on "Heroes de Accion"—don't demonstrate Maret's dynamics. That's no criticism, but rather high compliment to the former accompanist of Hunter and Pat Metheny. The diminutive harmonica master squeezes the finest of filigreed notes from his instrument, as he does on "This Too Shall Pass"—sounding at once breezy and melancholy, and reorienting the whole band to a different level.

It's the mark of a great musician to elevate the playing of those around him as they accommodate the sound he adds and Maret does that here, bringing out unusual facets of all the players' individual styles, especially organist Brian Coogan on "Fauxfessor." While Ellis' saxophone is lusty and robust on this cut, the keyboardist comps slyly along as the group slides in and out of blues progressions.

If "Dewey Dah" sounds familiar, it should; it's reminiscent of the original material Ellis brought to seven-string guitar wizard Hunter's group's while they played together from 2003 to 2006. The title song is more of the same, but doesn't sound over-familiar precisely because it is such an unpredictable piece of music. The way the melodic and rhythmic lines interweave and double back on each other is also ideal for this band's idiosyncratic style.

In those moments when Maret improvises over a quasi-martial beat supplied by Marsalis and Perrine, Double Wide bonds as a unit. With Puppet Mischief, Ellis reaffirms that he has truly found a niche for himself and his individualistic style of playing, composing and band leading.