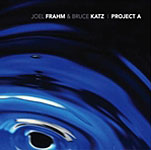 Joel Frahm and Bruce Katz's Project A is not a codename for a scientific research program or some covert operation, but, instead, a finger-snapping, toe-tapping tribute to the original Queen of Soul, singer Aretha Franklin.

Frahm, a superlative saxophonist who has worked with Maynard Ferguson, Brad Mehldau and Kurt Rosenwinkel, is joined by Bruce Katz, a master Hammond B3 player and pianist, who is well known in R&B, blues and rock circles, having performed with Gregg Allman and Ronnie Earl & the Broadcasters.

Joined with two drummers and two bassists who are divided between nine spirited songs, the musicians pay homage to Franklin whose songs such as Stephen Stills' 1970's hit, "Love The One You're With," are cultural gems in American roots music. While tunes such as "Respect" are missing from this set, the music vividly gives insight into Franklin's upbringing, which has roots in gospel music, in her hometown of Memphis, Tennessee and the influence of Detroit, Michigan, even though she never recorded for Motown.

Frahm's horn exudes a Maceo Parker tonality on the stomping "Don't Play That Song," with guitarist Chris Vitarello bringing some B.B. King flavor and Katz serves up some impressive juke joint stride piano. The band goes straight to church in "Spirit In The Dark," Franklin's compelling spiritual testimony, as Katz switches to B3 and lays plenty of grits and grease, while Frahm's answers with skonks and rapid-fire tenor.

"It Ain't Fair" is down-in-the-dirt blues with a rhythm section funeral march, lamenting horn vamps, wailing guitar, and a preaching B3. It is music that hurts so good. The band has some tricks up its sleeve with "What A Friend We Have in Jesus," a tune that contains New Orleans spiciness and Vitarello's Ry Cooder-like slide guitar blues. But the groove is fully realized on Franklin's 1971 hit "Rock Steady," from Atlantic Records' Young Gifted and Black, with funky bass line and Katz's frosty Wurlitzer.

Project A does the Queen of Soul justice. Enjoyable, recession-proof music with a whole lot of soul. The only thing better would be to have Aretha Franklin singing with this very hot band.

Visit Joel Frahm and Bruce Katz on the web.