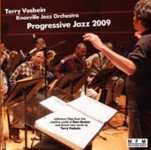 Over the last few years, Terry Vosbein, a Professor of Music at Washington and Lee University and a classically-trained composer of symphonies, operas, and chamber music (not to mention a former bassist with the Glenn Miller Orchestra), has been exhaustively researching the unrecorded scores from the Stan Kenton Collection at the University of North Texas. Now, thanks to his meticulous research, Vosbein leads the Knoxville Jazz Orchestra in the debut recordings of four originals and two arrangements by Kenton's eminence grise Pete Rugolo plus two charts from the iconoclastic composer/arranger Bob Graettinger, all dating from the period 1946-48. Moreover, Vosbein, an alumnus of the Kenton clinics during the Seventies, has added five of his own Kenton-inspired compositions plus a long-overdue Kentonian setting of a Stephen Sondheim classic.

Rugolo's 1948 "Artistry In Gillespie," an excursion into bebop a la his "Capitol Punishment" recorded the previous year, launches the CD with the force of a rocket, with David King, Don Hough, Stewart Cox, and Rusty Holloway respectively re-creating the solo roles of Kentonians Art Pepper, Milt Bernhart, Ray Wetzel, and Eddie Safranski. The Rugolo treatment of Claude Debussy's "Afternoon of a Faun," which dates from 1946 when the opus was about 55 years old, retains the impressionistic atmosphere of the original while transporting it into the realm of Kentonia via Doug Rinaldo's alto. "Don't Blame Me" is a typical Kenton ballad arrangement from the Forties, opening with the piano of Bill Swann, then building to a climax featuring Wayne Thompson's trumpet, and finally settling to a quiet coda following Holloway's bass interlude. Hough re-traces the solo path of Eddie Bert on Rugolo's "Hambeth," one of the few opuses in the Kenton repertoire with a Shakespearean title.

"Cuban Pastorale," by the then 24-year-old Graettinger, is an atonal visit to Havana which avoided recording due to a commercial ban imposed by the American Federation of Musicians throughout most of 1948, featuring trumpeter Rich Willey. Graettinger and Rugolo appear to have traded roles on their respective charts of "Walkin' by the River" and "Rhythms at Work," with each arrangement remarkably resembling the style of the opposite arranger (i.e. Graettinger's writing sounding more like Rugolo and vice versa).

Vosbein's own contributions would have easily qualified for acceptance into the Kenton library, and two of them (his arrangement of "Johanna" from Sondheim's Sweeney Todd, which spotlights the trombone section in a most Kentonian mode, and the original "Ahora es el Tiempo") merit inclusion in the repertoire of Mike Vax's Kenton Alumni band. In his writing, Vosbein interweaves the influences of Rugolo, Graettinger, and such other distinguished Kenton arrangers as Bill Holman, Ken Hanna, Bill Russo, and Willie Maiden.

One additional bonus: the CD package displays a rare 1948 color rehearsal photo showing Kenton, Rugolo, and Graettinger, along with saxophonists Bob Gioga and Bob Cooper with their backs to the camera, courtesy of the UNT Kenton Collection.