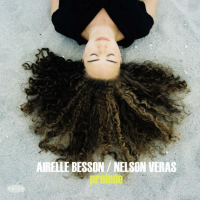 French trumpeter and composer Airelle Besson and Brazilian guitarist Nelson Veras have stuck up quite the duet relationship that manifests itself properly on the present Preludes. The trumpet/guitar format is not your typical duo, but it works extremely well in the hands of these two like-minded musicians. The two share a warm aural intimacy even more profound than various piano-based duets.

Besson is a lyrical trumpeter who favors long melodic lines not afraid to tell a story with consonance. She plays open bell throughout the eleven selections. Her tone is well conceived and produced with an evenly distributed density. On "Virgule," a completely improvised trumpet line, Besson shows that her delivery is enhanced by her middle register, siren—like tone. Versa's guitar playing reveals not a little of his native Brazil without overstating the fact. Whether soloing, comping, or accompanying, Versa provides well-grounded playing that is neither flashy nor common.

Prelude exists as a loosely associated suite where snippets of standards emerge and then fall back into the well of Besson's imagination. This is quiet and thoughtful music perfect for rumination and daydreaming. There is a powerful muse here effectively delivered.