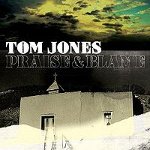 In his brilliant alternate reality novel, The Yiddish Policemen's Union (HarperCollins, 2007), Michael Chabon has a fellow Jewish detective tell plot-protagonist Meyer Landsman that, "it's a strange time to be a Jew." Apparently, it is a strange time to be a Christian also. In what time would it not be strange that 1960s Welsh sex symbol Tom Jones turns 70 and releases an album of American gospel and spirituals, one that is really quite excellent? These are strange times, indeed. Could we possibly be further from "It's Not Unusual" and "What's New, Pussycat"?

Tom Jones never quit recording after his heyday in the 1960s. He and Elvis Presley took the same Las Vegas professional route and both ended up in exile, albeit two very different ones. Adding the mystical late-period Johnny Cash to the mix, and the context in which to consider this Jones release emerges. That said, now the obvious must be stated: Jones has released Praise and Blame into the same creative category as Presley's 1968 comeback period and Johnny Cash's American Recordings.

Using a small, organic band, employing a banjo, steel guitar and accordion, Jones interprets a variety of lesser-known spiritual Americana tunes. A stark and simple reading of Bob Dylan's "What Good am I," from Oh, Mercy (Columbia, 1989), introduces the disc, displaying a voice scarcely diminished by time. Jones, like Presley and Cash, was blessed with an instrument of singular grace. He recasts Jesse Mae Hemphill's "Lord Help" in the guise of Led Zeppelin's "How Many More Times," from Led Zeppelin (Atlantic, 1969,—or, perhaps more appropriately, Howlin' Wolf's "How Many More Years" (Chess, 1951). Jones digs deep.

Sister Rosetta Tharpe's "Strange Things" is given a black rockabilly treatment: acoustic, urgent, rocking. But it is with John Lee Hooker's "Burning Hell" that Jones rips up the floorboards to reveal the True Vine, as transmitted by Ethan John's slashing slide guitar recalling Jimmy Page on "In My Time of Dying." Voice, guitar, and drums summon a mean spirit, difficult to satisfy.

The most potent comparison with Johnny Cash's final recordings, Jones covers "Ain't No Grave" (which opened Cash's final American recording, American VI: Ain't No Grave (American Recordings, 2010)), replete with banjo and steel guitar. Ending the disc is "Run On," which Cash covered as "God's Gonna Cut You Down" on American V: A Hundred Highways (American Recordings, 2006). Here, Jones—backed by a Muddy Waters power trio—displays the vocal prowess that made him famous 50 years before.

So, what must be made of Jones' contrition and conversion? Does the one-time pop idol have any right whatsoever to plunder the American hymnal? The answer is: yes, and the reason is: like Elvis Presley, he has such a voice and command of the material that he can make it his own. Jones has never made a better recording, nor one to be taken more seriously.

What Good Am I?; Lord Help; Did Trouble Me; Strange Things; Burning Hell; If I Give My Soul; Don't Knock; Nobody's Fault But Mine; Didn't It Rain; Ain't No Grave; Run On.