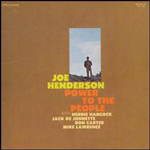 Joe Henderson enjoyed widespread popularity only late in his career, when his cover albums for Verve achieved high (for jazz) sales figures, but since the early '60s he had been making excellent records, both as a sideman and a leader. Here at last is 1969's Power to the People, one of his best recordings made for Orrin Keepnews' Milestone label, previously available only as part of the boxed set The Milestone Years.

Power to the People features a titanic rhythm section of Herbie Hancock (acoustic and electric piano), Ron Carter (acoustic and electric bass) and Jack DeJohnette (drums), with a guest appearance by Mike Lawrence (trumpet) on several tracks. Henderson, clearly inspired by the potent playing of his bandmates, is in top form, spinning out long every-note-counts lines, varying his phrases from compact melodic cells to broad sweeping gestures that range up and down the horn; his tone, sometimes mellow and smoky, other times hoarse and gruff, perfectly complements his imaginative improvisations.

Highlights include the debut of Henderson's gorgeous ballad "Black Narcissus," some five years before its inclusion on that titular album; a new version of "Isotope," a quirky blues with an oddly catchy melody that originally appeared on 1964's Inner Urge and was one of Henderson's most beloved tunes; the samba-esque title track, with great solos by Henderson, Lawrence and Hancock; a medium-swing take on the standard "Lazy Afternoon," with a premium tenor spot and tastefully restrained piano accompaniment and the astounding closer, "Foresight and Afterthought," a trio number divided into three themeless sections that finds Henderson flying—no, soaring—by the seat of his pants, playing in the cracks of mainstream thematic development and pure-sound ecstatica. Given the strength of a mid-career release such as this, it's surprising that Henderson's extraordinary talent wasn't heralded sooner.