Portrait of a Phantom: The Story of Robert Johnson’s Lost Photograph by Zeke Schein with Poppy Z. Bright 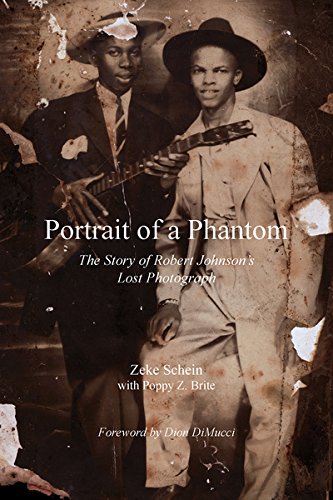 We have been quickly approaching a reportage endgame on the legend and reality of storied bluesman, Robert Johnson. There exist several unpublished biographies of the Johnson that have remained so because of the threat of litigation and the cynical greed of people now long dead. Now what remains are estates perpetuating this same litigious greed that will continue to suppress these biographies for, at least, the near future.

The only thing, it appears, that the arm-chair Robert Johnson music scholar has to look forward to are books like Zeke Schein's Portrait of a Phantom: The Story of Robert Johnson's Lost Photograph, his book detailing his discovery of a famous third photograph of Johnson, and its surrounding controversy, that now joins the two certified photographs located in 1973, originally in the possession of Johnson's half-sister Carrie Thompson and not published until the late 1980s. As it turns out, this is not bad at all.

Schein is a bit of a Renaissance man whose life provided him a curious skill set that involved being a musician, photographer, writer, and, like so many of us, an American Romantic in search of the unknowable truth. Schein has crafted more of a vignette than a story, a thread this is pulled gently through the adult life of a man who has not forgotten how to dream, nor how to understand the value and necessity of myth.

Schein was immersed in the musical environment of the 1980s and '90s. He was personal friends with Patti Smith and met the likes of Lou Reed, Bob Dylan, Dave Van Ronk, Elvis Costello, and a variety of other notable musicians, many of whom were his customers when he worked at Umanov's Guitars in New York City. June 2, 2005, while looking for interesting instruments to purchase for the store on Ebay, Schein happened upon a collection of old photographs of blues artists. One such photograph was labeled, "Old Snapshot Blues Guitar B. B. King??? AAMUS." Schein looked at the photo and didn't think the figure, standing with another man, looked like B. B. King...he thought it looked like Robert Johnson, standing with a young Johnnie Shines.

The story that unfolds is that of an autodidactic Everyman historian, not unlike the record collectors of the 1950s and '60s, Harry Smith, Samuel Charters, Stephen Calt, Gail Dean Wardlow, Dick Waterman, John Fahey, and many more, who, ignited by the Ghost Story of Johnson, embarked on a decade long sojourn to add needed information to a mythic canon as substantial as smoke. Throughout this story, Schien is a humble purveyor of a hope, the hope that he found something of substance from a story yet to be told, if ever. He describes his efforts to have the photograph substantiated, the vicious retort from the blues community, whose doubt may have been driven by the age-old necessity "to be right" about something there is no "right" associated with, because their original suppositions on their story are built on a foundation of blowing sand.

Like Schein, I was caught up in the pure Romanticism of Johnson. We are about the same age and had approximately the same evolutionary realization about the blues, starting with the white American Version, passing through the British Invasion version, finally arriving at the proper African-American version. His story resonated heavily with me, pausing to make me think that, in my old age, I have become too cynical, too jaded to believe in what could be as opposed to what is and has been. Schien's enthusiasm reminded me of how powerful music is and how important music's story has become.

Early in his book, Schien describes reading Victor Frankl's Man's Search for Meaning (Verlag für Jugend und Volk, 1946) during this period and how it brought perspective to his part in adding to the important and contentious history of Johnson. He alludes to this book at the end, tying his story up with all the circularity that exist in another great story beginning with Genesis 1:1 and ending with Revelation 22:5, while extracting his humanity from a historic process made sterile by design, money, arrogance, greed, and exploitation. From my purely superficial fascination of Johnson and what we did not know about him, was a book by blues expert and author Elijah Wald (one of Schein's critics), Escaping the Delta: Robert Johnson and the Invention of the Blues (Amistad Press, 2004), that first punctured and then totally corrected, the Romantic blues dream I had been in since discovering Robert Johnson- -King of the Delta Blues Singers (Columbia, 1961). It would take Alul Gwande's book Being Mortal (Metropolitan Books, 2014) to do for me what Man's Search for Meaning did for Schein.

Schein's book includes enough new biographical information about Johnson without becoming boring to the experienced reader. His narrative is whip smart, and reading his slim volume goes quickly. The author's grace and humanity are revealed brightly throughout his story, which reveals accounts of his family, friends, and acquaintances told in the familiar fashion of one friend talking to another, telling a story.

And maybe this is the lesson. The real story is not the biography of this phantom itinerant black man who died in 1937, leaving twenty-nine scratchy shellac recordings that greatly influenced the music of the British Invasion and, thereby, American Music. Maybe the real account is the story about the story of Robert Johnson. The story detailing a handful of record collectors who defined the blues as the blues, eventually seeing fit to revert to their lesser angels and fight among each other, resulting in suppressing sixty years' worth of hard-won music scholarship. That story will sadly prove more interesting that the matter at hand, that of the life of Robert Johnson.

Schein's book is now a part of that story, but sad it is not. Hopeful it is. Like Beethoven's music waiting 125 years for Herbert von Karajan and the Berlin Philharmonic to properly play it, the story of Robert Johnson awaits the proper storyteller, with the right intentions, to reveal the truth beneath the myth. Portrait of a Phantom: The Story of Robert Johnson's Lost Photograph is a step in that direction.

I believe I will read Man's Search for Meaning next.