By Robert Gilbert
February 1, 2003
Sign in to view read count 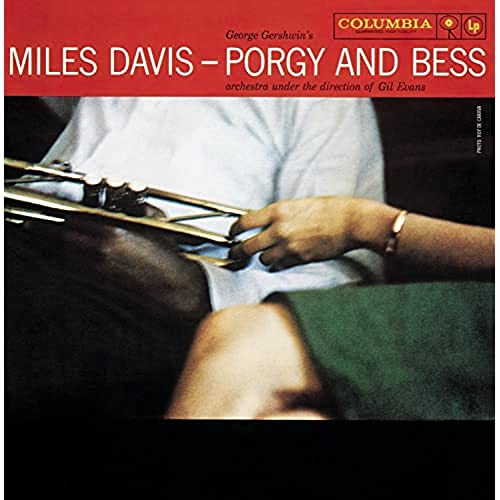 In jazz, only a handful of albums never lose their lustre. Each listening is a magical experience, no matter how familiar the material has become. The second collaboration between Miles Davis and Gil Evans, Porgy and Bess, is one such distinctive recording.

Davis and Evans’ recasting of the George Gershwin opera was their followup to the magnificent Miles Ahead. Many of that album’s characteristics are also present on Porgy and Bess : lush orchestrations, a wide-range of material between exuberant swingers and tender ballads, and plenty of virtuoso playing by Davis.

At the time the album was recorded in the summer of 1958, the trumpeter was leading one of the greatest small-groups in jazz history, with front-line mates John Coltrane and Cannonball Adderley as well as a rhythm team of Bill Evans, Paul Chambers and Jimmy Cobb. Miles was also enjoying a level of popularity normally not reserved for a jazz musician, reflecting a combination of reaping the benefits of recording for a major record label and the image he created of the ultra-cool, yet ultra-temperamental, take-no-crap artist.

So, it’s no surprise that Davis’ trumpet work on Porgy and Bess reflects a man full of confidence who knows he is at the top of his game. Rarely did Davis ever play with such consistency . His up-tempo work is full of swagger, such as his hip, laid-back rendering of “Summertime” and the marvellous trumpet break at the end of the first chorus of “The Buzzard Song.” His ballad playing has his trademark warmth and depth of emotion, with Davis performing beautifully on “Oh Bess, Oh Where’s My Bess” and “I Loves You, Porgy,” for example.

Complementing and heightening the magnificence of Davis’s work are the wonderful arrangements from the pen of Gil Evans. Davis’s tortured thoughts at the end of “Prayer (Oh Doctor Jesus)” wouldn’t mean much if Evans hadn’t written out a series of orchestral crescendos against them. On each track there is at least one moment of pure musical bliss as a result of the genius of Evans. The tuba and bass duet that closes “The Buzzard Song,” the unbelievably delicate sound Evans elicits from the orchestra on “Fisherman, Strawberry and Devil Crab” and the sudden burst of brass at the five-minute mark on “My Man’s Gone Now” are all defining moments that elevate Porgy and Bess to the level of a masterpiece.

Any appreciation of Porgy and Bess would be sorely lacking without mentioning Evans’ recasting of “Gone, Gone, Gone” (itself a wonderful performance) into “Gone.” The tune is a showcase for drummer Philly Joe Jones, who performs some unbelievable drum fills in between statements by the orchestra. An alternate take of the tune was added to the 1997 CD reissue illustrating the perfection of Jones’ playing on the master version.

Porgy and Bess is just one of many great albums that Miles Davis recorded over his lifetime. It reaches a higher plateau than most, though, in its way that it can reach the listener on both a musical and emotional level. That the album is still able to do this after almost forty-five years is a testament to the rare magic that occurred in a New York studio over four days in the summer of 1958.