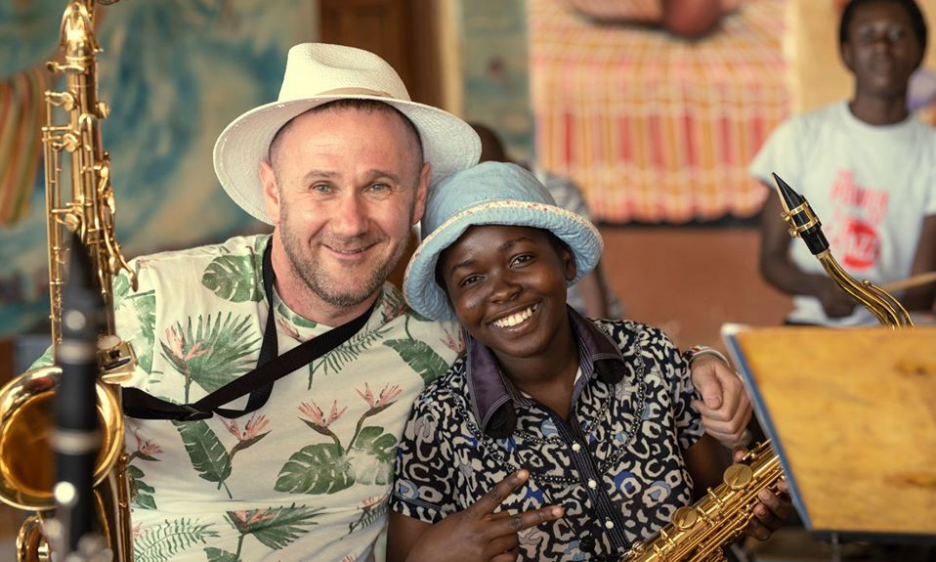 By CHEPTOO KOSITANY
May 31, 2020
Sign in to view read count
Sylwester Ostrowski is an accomplished tenor saxophonist, composer, producer, and bandleader of the Jazz Brigade. He is experiencing major success in his music career, built around collaboration with other artists, and partnering with jazz institutions through his organization Szczecin Jazz. Ostrowski's global connections span four continents from Europe, North America, Africa, to Asia.

Ostrowski is a leader in Poland using jazz to build cross-cultural connections. His work has earned the city of Szczecin his hometown the label "The Jazz Capital of Poland" and the Mayor has given him the title of Honorary Ambassador of Szczecin. Ostrowski's accomplishments include Honoring Polish history and legacy through jazz, Cultivating and promoting Polish jazz and culture, and Connecting and collaborating globally with jazz artists and organizations.

The year 2018 was meaningful to Poland with three major historical anniversaries that changed the trajectory of the country. The 100th year of the restoration of Poland at the end of World War I as a nation. The 60th year when Dave Brubeck's Quartet accompanied by his 11—year-old son Darius Brubeck toured Poland through the U.S State Department program, Jazz Ambassadors with Szczecin being the first leg of the tour. The 100th year of the establishment of diplomatic relations between the U.S and Poland.

To celebrate 100 years of Polish Independence and the anniversary of Dave Brubeck's tour of Poland, Ostrowski produced and presented a historical concert featuring the legendary Jazz at Lincoln Center Orchestra with Wynton Marsalis and famed American pianist Darius Brubeck who was returning to Szczecin for the first time after he accompanied his father on the tour in 1958. As part of the celebrations Ostrowski's band, the Jazz Brigade paid tribute to Polish culture, including the classical music of renowned Polish composer Frederic Chopin. They made history again when Ostrowski, Marsalis, and Brubeck performed "Take Five" together, which remains the biggest-selling jazz single of all time and recorded by the Dave Brubeck Quartet.

Dave Brubeck's music and his cultural diplomacy had a major impact in Poland and Szczecin and continues to this day. To commemorate 100 years of diplomatic relations with the U.S. established shortly after World War I, Ostrowski collaborated with Darius Brubeck and his Quartet to recreate the 1958 legacy tour of Dave Brubeck. U.S. Ambassador Georgette Mosbacher hosted a reception at her residence in Warsaw to honor the relationship between the two countries and this is where the tour launched. They traveled to six cities throughout Poland. The tour was a tremendous success!

As part of the tour, Ostrowski produced and recorded his album In Our Own Way bringing a fusion of American and Polish jazz, the classical music of Frederic Chopin, and the traditional music of Poland and Japan. On this album, Darius Brubeck pays tribute to his father by performing "In Your Own Sweet Way." Ostrowski refers to the album as a "multicultural artistic dialogue," featuring artists from all over the world. His Jazz Brigade band includes trumpeter Freddie Hendrix from New Jersey. Drummer Eric Allen from Washington DC and lives in Poland. Pianist Miki Hayama, originally from Japan now lives in New York. Bassist Essiet Okon Essiet from New York and a son of Nigerian immigrants. Special guests include vocalist Deborah Brown from Kansas City. pop-jazz singer Icon Dorota Miskiewicz from Poland and Gospel singer Dorrey Lin Lyles from New Jersey but lives in Germany.

Ostrowski plans to continue honoring the history and legacy of Poland and his hometown Szczecin through his music in collaboration with other artists.

Ostrowski believes it is essential that art is part of society. Before going back to fulfill his dream as a performing artist, he focused his energies on ensuring that the city of Szczecin had an institution focused and dedicated to art. In September 2010, he founded the Academy of Art in Szczecin. The Academy recently celebrated its 10th year anniversary in 2019.

The cultivation, support and mentoring of up and upcoming artists is important to Ostrowski as he has enjoyed the opportunity by Polish trumpeter Piotr Wojtasik, who offered him a recording session with top American jazz musicians including Wayne Dockery, Reggie Moore, and Newman T. Baker that jump—started Ostrowski's musical career.

Ostrowski's upcoming album features artists from the Jazz Forum Showcase, providing an opportunity for these young talents to showcase their music and introduce themselves to the world.

Connecting and Collaborating Globally with Jazz Artists and Organizations

Trumpeter Keyon Harrold and Ostrowski have nurtured and grown their collaboration over the years and through the Culture Revolution project they have toured throughout Poland and performed together at Blue Note Jazz Club. They jointly recorded and produced an album "When You Are Here." In 2019 Harrold together with Ostrowski secured Erykah Badu as the headliner at the 2019 Szczecin Jazz Festival organized and produced by Ostrowski. It gave the Culture Revolution the opportunity to perform with Badu, a major accomplishment for both artists. They awarded the 2019 Szczecin Jazz Festival the Outstanding Performance in Poland by the Jazz Forum Magazine writers.

Ostrowski's engagements and collaboration throughout Europe and Asia are vast. He has worked and performed with artists from Europe including Ukraine, France, Britain, Rome, and Russia. He recently took part in Jazz Across Borders in St. Petersburg, Russia with pianist Yakov Okun, a major force in Russian Jazz. In Asia, he has performed in 5 cities in Japan, the city of Canton in China and Jakarta, Indonesia.

The city of Szczecin was one of the first cities to join Jazz Sister Cities, opening doors for Ostrowski, to further his global collaborations. One door that opened was to Africa. In collaboration with Nairobi, Kenya, a Jazz Sister City, and under Ostrowski leadership, his band the Jazz Brigade made history when Polish and Kenyan jazz artists shared the stage for the first time at the 2019 International Jazz Day hosted by the Safaricom Jazz Festival at Bomas of Kenya. Accompanying Ostrowski on the trip were journalists from Jazz Forum, Poland's leading jazz magazine documenting the entire journey.

The journey to Nairobi gave Ostrowski the opportunity to engage the Polish Ambassador to Kenya, Jacek Andrzej Bazański, putting plans in place to make it possible for Kenyan artists to travel to Poland with fewer restrictions. As part of the Jazz Forum Showcase Powered by Szczecin, Kenyan jazz artists could travel to Szczecin as delegates, continuing to build a stronger cultural exchange between the two communities.

Ostrowski's musical historical journey to Africa transformed him when he gave back by providing music clinics for youth living in the slums of Nairobi through a program, Ghetto Classics, a non-profit that seeks to transform the lives of youth from underprivileged backgrounds by introducing them to the world of live jazz and classical music. Ostrowski is planning an ongoing exchange program between Polish artists and Ghetto Classics.

Ostrowski's connection to Kansas City is special and began in 2015 with his first introduction to Deborah Brown, whom he has worked, performed, and recorded with. This relationship would lead to Ostrowski traveling to Kansas City doing Jam Sessions with various artists and bringing top Kansas City jazz artists including Deborah Brown, Kevin Mahogany, Bobby Watson, Dominique Sanders, and the Kansas City Jazz Orchestra to perform in Szczecin and throughout Poland.

Ostrowski performed for the first time in 2018 with Kansas City artists at the historic 18th and Vine Jazz District in the Gem Theater during the launch of Jazz Sister Cities. This was vital to Poland as it was the first time that a Polish artist was performing with Kansas City artists in one of the world's cradles of jazz. Two major Polish media outlets accompanied Ostrowski, Axel Springer Group, an affiliate of Business Insider and Newsweek in Poland, and the biggest media group in Poland Agora who documented the entire experience and shared with the Polish people.

Ostrowski believed and understood the importance of young Polish jazz artists' learning from, experiencing, and appreciating the forefathers of jazz. He saw an opportunity during Charlie Parker's Centennial (2020) as the moment to fulfill this goal by leading a highly talented group of Polish artists and media to Kansas City in February 2020.

Ostrowski's trip to Kansas City coincided with the Super Bowl. Kansas City Chiefs were in the Championship for the first time in 50 years. Ostrowski, who had no interest in sports and the Super Bowl game, spent his time practicing his music in the basement of a friend he was staying with, in Kansas City.

However, he could not escape the chants, the cheering and screaming from upstairs from Chiefs' fans as they cheered their team on winning the Super Bowl. He heard the Chief's chants repeatedly, and it made him appreciate how the city loved its home team, distracting him from his original practice. It inspired him to compose music from the chant.

Ostrowski, vision on moving his music forward and highlighting Szczecin and Poland through strategic collaboration is a winning strategy. 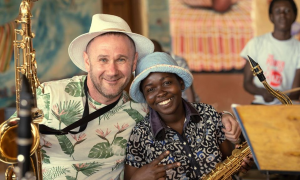