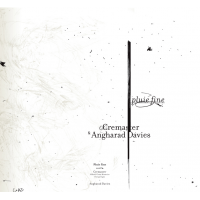 Cremaster is the well-established electro-acoustic duo of Alfredo Costa Monteiro and Ferran Fages, both from the Barcelona experimental music scene. While using electro-acoustic devices, they commendably claim to avoid effects, loops or prerecorded material—which certainly distinguishes them from many others active in a similar area. As a duo, their releases notably include Live at Audiograft (Consumer Waste, 2012) and Igneo (Cathnor, 2010).

Pluie Fine is distinctly different, as it integrates the duo with the London-based Welsh violinist: Angharad Davies. She is active both as an improviser and as a performer of contemporary compositions, typified respectively by two highly-praised 2012 releases, Outwash (Another Timbre, 2012) and Ist gefallen in den Schnee (Another Timbre, 2012).

Pluie Fine consists of three tracks, each clocking in at around the fifteen-minute mark. Rather than being improvised, the album credits indicate that they were composed, recorded and assembled between September 2010 and July 2012 in Barcelona, with violin parts recorded by Kostis Kilymis on March 2012 in Oxford. The album is the result of several exchanges of recorded material shared between Cremaster and Davies from 2010 to 2012, each piece having been built up from multiple transformations passing slowly back and forth between the musicians. All of which paints a fascinating picture of the creative process, one which seems akin to good improvisation, with ideas passing backwards and forwards between the musicians and slowly evolving towards a commonly agreed music; the only difference is the time scale—while improvisation happens in moments, this album was created over years.

But, whatever the process, the end result is three contrasting pieces, each with its own unique character and soundscape. So, the opening "Embrun" is smooth-flowing and ethereal while the higher frequencies of "Buine" have a harsher edge and are not as easy on the ear, with the closing "Crachin" a happy medium between the first two. All three tracks display the time and effort invested in creating them; their separate strands fit together seamlessly, ebbing and flowing to make room for each other, but together forming a coherent whole which depends on each of them—if any strand were removed, the totality would be the poorer for it. The violin—prepared, as Davies often does—is entirely equal and compatible with the duo's electronics and, at times, could itself be taken for electronically generated tones. Altogether, the album makes engaging and multifaceted listening.