By Jack Bowers
September 21, 2016
Sign in to view read count 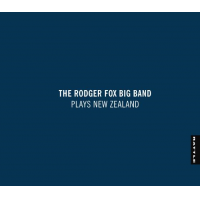 Although trombonist Rodger Fox has somehow managed to keep New Zealand's finest big band alive and swinging for more than four decades, the band has never devoted an entire album to music written and arranged by New Zealanders—until now. That's not to say that Fox and the band have ignored music from their home country. Over the years, more than ninety compositions by New Zealand-based musicians have been commissioned for the ensemble, sixty-eight of which have made it onto various recordings by the band. This time, however, the Rodger Fox Big Band Plays New Zealand —exclusively, performing nine works by a cross-section of that country's most accomplished composers (and arrangers).

Five of the album's nine selections were written by members of the band including two ("Mr. Brown," "Matakana") by guitarist Nick Granville and one apiece by saxophonist Roger Manins, pianist Anita Schwabe and Fox himself. The others were penned by Norman Meehan ("Roma in the Present Tense"), Johnny Rae ("North of the Apricots"), Phil Broadhurst ("Panacea") and something or someone named Fat Freddy's Drop ("Wandering Eye"). Matt Harris arranged "Roma" and "Panacea," with other charts by Jesper Riis ("Wandering Eye"), Daniel Hayles (Manins' funky "John Scon"), Jeff Driskill (Shwabe's multi-layered "Arching Birch") and Bill Cunliffe (Fox's zestful "X-Juicy"). As has been the case on a number of albums past, the virtuosic Jon Papenbrook has traveled from southern California to join the trumpet section (and play lead on seven tracks).

Most of the themes on offer are plain-spoken and aimed squarely toward the epicenter of the listening audience, although there is a smattering of funk (on "John Scon") plus more of the same with a side order of rock on "Wandering Eye." In this case, it should be pressed home that candid doesn't equal uninspired. Far from it. The charts are consistently engaging and well-written, while solos are trim and persuasive. Fox takes more than one, as do Granville, trumpeter Ben Hunt and saxophonists Bryn van Vliet and Jake Baxendale. Schwabe is front and center on her own "Arching Birch," as is baritone Eilish Wilson (with Fox) on "Wandering Eye." Besides soloing on "North of Apricots" and "Panacea," drummer Lauren Ellis presides over the band's impressive rhythm section.

As it turns out, the best New Zealand has to offer is very good indeed, and the wish here is that it won't be long before Fox's superlative band Plays New Zealand once more.