By Mark Sullivan
November 10, 2017
Sign in to view read count 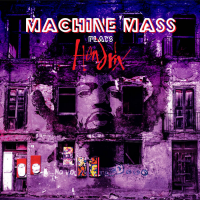 Belgian trio Machine Mass returns with a creative take on the music of a rock icon: guitarist/composer Jimi Hendrix. Founding members guitarist Michel Delville and American drummer Tony Bianco are joined this time by keyboardist Antoine Guenet, who proves to be a perfect partner. The duo was filled out by reed player Jordi Grognard on their debut As Real As Thinking (Moonjune Records, 2011) and by saxophonist Dave Liebman for the stellar follow up Inti (Moonjune Records, 2014). Interpreting Hendrix's music naturally puts considerable focus on the guitar, but Guenet contributes in both expected and unexpected ways.

The set opens with "Third Stone From The Sun," a great place to start for instrumental versions—everything else on the album had vocals originally. Expectations are subverted right out of the gate as the theme is played by the keyboards as an introduction, before launching into the familiar groove (with bass line played by Guenet, as presumably most of them are). "Purple Haze" features a long rubato piano introduction, which teases the famous riff before the drums and guitar enter. After that Delville lets it rip with full-tilt overdriven psychedelic rock guitar.

That's how it goes all the way through: a very free interpretation of Hendrix's music, which nonetheless retains a feeling of rock and roll energy. Other memorable moments include "Burning of the Midnight Lamp," which is almost entirely a keyboard feature. It opens with solo piano, in a dramatic reharmonization: some of the most "jazz" sounds on the record. Guenet moves to the organ, the rhythm section finally enters, and the theme is finally played on guitar only at the very end.

Delville works a "Strangers in the Night" quote into "You Got Me Floatin,'" and Hendrix himself makes a cameo appearance on the closer "The Wind Cries Mary." It's an excerpt from an interview in which he describes the positive feelings he tries to evoke in his music. The only version that fails to capture the source material for me is "Fire." It's a grooving track, but it largely abandons the pronounced soul feel of the original.

The band says that the tracks were recorded live—with no overdubs and minimal editing—and are presented in the order they were recorded. That makes the easy flow of the session all the more remarkable. Recording a single Hendrix rearrangement might have come off as a novelty, but the band is clearly all in for this session. They sound like they're having a blast, and the listener is guaranteed the same.