BY IAN PATTERSON
November 26, 2008
Sign in to view read count 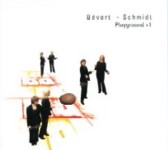 Playground + 1 is an apt name for this impressive release by this Danish quartet led by saxophonist/vocalist Pernille Bevort and pianist Marie Louis Schmidt, as in many ways a playground bears analogy to a jazz group. In both, freedom exists within boundaries and individual expression thrives within a group identity. There is a collective dependency and there are elements of idiosyncratic behaviour, moments of calm reflection, and, in the midst of the general harmony, there are occasional clashes. In the final analysis though, many voices sound as one.

It would be wrong to infer from the title that that this music is somehow frivolous or lacks control, for the arrangements are tight and discipline is key to the album's success—there is no excess fat on these original-sounding tunes and the solos, while free-spirited, are measured, like brief side roads on a longer journey The melodies and harmonies that exist within the phrasing are where the emphasis lies.

The cut and thrust between Pernille and guest saxophonist Jan Harbeck is at the heart of the material. On the opener, "Mr. Gumbob," the two tenors weave in and out of each other's slipstream as if in a highly animated conversation, propelled by the dynamic rhythm provided by drummer Karsten Bagge and bassist Thomas Vang. The combination of two saxophones or saxophone and bass clarinet produces nice, angular lines in addition to arresting harmonies, and this is seen to good effect on the Schmidt-penned number "Og Aligevel," with its slightly free-jazz vibe.

When she steps out alone, Pernille shows herself to be a highly accomplished player, replete with ideas, as on "Mixed Double." On the seductive slow number ""Simmering Anxiety," she displays a lyrical story-telling logic reminiscent of Wayne Shorter, though her voice is very much her own. On this latter tune, Schmidt'unhurried right-hand solo lights up the tune and draws the two saxophones into her spell. Schmidt's undemonstrative grooves at times suggest the swinging simplicity of Count Basie, and she has a lovely funky, bluesy approach to boot. The spirit of Thelonious Monk is very present in Schmidt's compositions, particularly in the quirky intros to "Fleun" and that of "Cowboys and Girls," the latter tune being one of the highlights of the album.

There are two vocal tracks, the kooky yet captivating "Cat Club Kittens" and the reggae-influenced "Mashed Potatoes," with an easy vibe and a lithe tenor solo from Harbeck. The lyrics are jocular, and while Bevort's voice is not especially noteworthy, her delivery is great and the lilt and cadences of her voice are horn-like, which is not entirely surprising.

The imaginative phrasing, layers of harmony, and the symmetry of the instruments suggests that this music would translate very well to a big band setting. Pernille and Schmidt have absorbed the lessons of Monk, Bill Evans, Miles Davis and Wayne Shorter and distilled the finer points to produce personal-sounding music which draws from tradition but which swings in the present. Well worth checking out.