By KARL ACKERMANN
June 8, 2016
Sign in to view read count 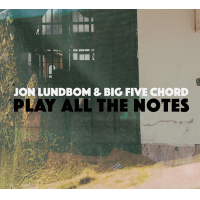 When we last left Jon Lundbom & Big Five Chord they had just released Bring Their 'A' Game, the second chapter in their four EP tetralogy. Like its predecessor, Make Magic Happen it was full of precarious diversions that went beyond well-mapped terrain. The group approaches the unfamiliar with cleverness, misdirection, and at times, a full-frontal assault on the senses. The third EP in the year-long series is Play All the Notes and the quintet does just that.

As on the first two releases, the leader/guitarist is joined by Moppa Elliott—on bass (he's also head of the hosting Hot Cup Records)—alto saxophonist Jon Irabagon (with Mostly Other People Do the Killing [MOPDtK] as is Elliott) and saxophonist Bryan Murray—aka "Balto Exclamationpoint"—on his hybrid sax (from which he devises his pseudonym) and drummer Dan Monaghan, the only non-original member of the group founded in 2009. Like each of the EPs, this installment runs about thirty minutes and will be released as part of a complete box set following the final EP.

"Comedy Gold" has Elliott setting down a melodic phrase with Irabagon's alto and Murray's tenor dueling for position before going very abstract and closing as a duo. "Period" opens with the kind of extended lyricism that is atypical of Big Five Chord and while still a bit eccentric, it's a great example of balancing structure and improvisation. Lundbom takes the lead about half way through and guides the piece into a complex maze of notes that continue to straddle the same line. As is the case with each of the first three EPs, this disc closes with an Ornette Coleman piece, "Humpty Dumpty" from This is Our Music (Atlantic, 1961). It swings initially, unison saxophones then followed by an extended Lundbom solo. Irabagon steps in afterwards and takes the piece apart, before quietly gliding to the finish.

There's been a tendency to describe Big Five Chord as if they were sometimes treading a line between something intangible and progressive jazz. But that underplays how the group distinguishes and supports the individualities of its members, maintaining unpredictability without losing concentration or musical playfulness. Whether Big Five Chord is executing a plaintive bluesy passage or scorching their eyebrows in a freefall, Play All the Notes, wastes nothing and gives in abundance.