By Troy Collins
February 6, 2007
Sign in to view read count 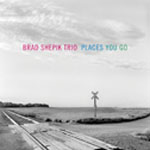 Venturing beyond styles and categories, guitarist Brad Shepik is one of today's pan-stylistic artists. From seminal gigs with trumpeter Dave Douglas' Eastern European folk-influenced Tiny Bell Trio to membership in the collective avant-Balkan trio Babkas, multi-ethnic investigations with the trio Lingua Franca, and his own world music-influenced quintet, the Commuters, Shepik is the quintessential postmodern musician.

Places You Go is a surprisingly traditional recording for the restless guitarist. With his regular bassist unavailable to travel in the summer of 2005, Shepik recruited organist Gary Versace to join drummer Tom Rainey on tour. After a successful run, the trio decided to document its affable rapport in the studio, resulting in this album.

Spinning out nuanced variations, they bring subtle innovations to conventional organ trio dynamics, digging deep into the tradition on "Frozen" and "The South." Rainey's supple polyrhythms and Versace's organ swells blend seamlessly with the leader's bright tone and lyrical phrasing. During introspective moments, Shepik and Versace recall the pastoral nostalgia of guitarist Bill Frisell and organist Wayne Horvitz on such Americana-tinged fare as "Return," "Five and Dime" and "As Was."

Places You Go recalls Shepik's past work, albeit filtered through the lens of a traditional guitar-organ trio. Blending understated multi-ethnic influences with classic styles, this is an album that reveals its pleasures gradually.