By John Kelman
February 6, 2007
Sign in to view read count 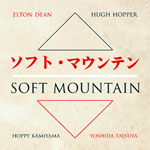 As the late saxophonist Elton Dean's final recordings are released, his remarkable ability to fit into any context becomes clearer than ever. From total spontaneity to groove-centrism, from rock-edged improv to detailed form, Dean consistently brought his own freewheeling yet never self-indulgent voice to each and every context. A year after he unexpectedly passed at the age of sixty, Soft Mountain is a bittersweet reminder of what's been lost.

Soft Mountain is another in a long line of "Soft -related groups featuring Dean and bassist Hugh Hopper, both members of the classic early-'70s lineup of the British jazz/rock pioneers Soft Machine. This one-time meeting with Japanese keyboardist Hoppy Kamiyama and drummer Yoshida Tatsuya came about during a Japanese Soft Works tour in 2003 with Softs alumni John Marshall (drums) and Allan Holdsworth (guitar). Looking for a break from relatively fixed setlists and song forms, Hopper contacted Kamiyama (who he'd met a couple of years earlier) with the idea of hitting a studio for a day to see what might happen.

Kamiyama brought in Tatsuya, and, with no discussion, the quartet dove right in, playing two totally out-of-the-ether 45-minute improvisations. The two-part "Soft Mountain Suite extracts the best thirty minutes from each improvisation, and the ground they cover is remarkable. There's something to be said about longstanding relationships (eg. Dean and Hopper's shared chemistry from years playing together), but there's also the excitement of facing the unknown for the first time that can create something stunning and completely unexpected.

Here all four players have big ears and quick reflexes. While some Softs-related projects have been a tad monochromatic stylistically, Soft Mountain moves organically from aggressive angularity to spacious delicacy, sometimes at the drop of a hat. The group also hits some serious grooves and, between Hopper's fuzz bass and Tatsuya's powerful attack, some powerful rock moves as well.

With a meeting of the minds this impressive, it's hard to single anyone out. Still, Hopper and Dean's greater notoriety makes their complete commitment to this kind of collective stream-of-consciousness less unexpected. Kamiyama is an outstanding and intuitive player who also possesses a strong appreciation for texture. Tatsuya is the real surprise here, though fans of the Gong universe will know him from various offshoots, including Acid Mother Temple and Acid Mother Gong. There are times when he's so reckless that it feels as though things might fall apart, but they never do. Instead, Tatsuya manages to work that tenuous middle ground between color and pulse.

The only shame about Soft Mountain is that it's a one-time affair. Still, the communal sound of surprise that defines this album is so vivid that it's possible an ongoing group might never have reached these heights again. Sadly, with Dean gone, we'll never know.