By David Adler
October 1, 2000
Sign in to view read count 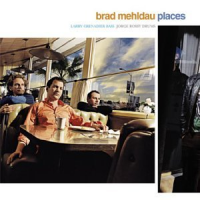 Aside from being his most directly personal statement to date, Places is also Brad Mehldau's second all-original album, the first being 1999's solo piano tour de force, Elegaic Cycle. The young piano sensation splits the program evenly between solo piano explorations and trio pieces with his regular cohorts, bassist Larry Grenadier and drummer Jorge Rossy. Each piece is named for a particular place (hence the title), which Mehldau attempts to represent in musical terms. In short, Places is a concept album, and a particularly effective one.

For the most part, Mehldau holds his prodigious chops in check, preferring instead to conjure moods and memories with subtle nuances. "Am Zauberberg" and "Airport Sadness" paint an exquisite picture of inward contemplation and melancholy, while "Paris," "Amsterdam," and "Perugia" convey a more restless, engaged sensibility. On the trio pieces "Madrid" and "Schloss Elmau," Mehldau seems to revisit territory he's been over on some earlier compositions, although the latter is one of his best melodies.

Perhaps the most endearing piece is "West Hartford," named for the Connecticut town where Mehldau grew up. The bright waltz seems clearly inspired by the joys and comforts of home. "A Walk In the Park," Mehldau's least place-specific title, similarly evokes a sense of happiness and confidence. Far more ambivalent is the two-part "Los Angeles," named for Mehldau's current place of residence. Part one kicks off the record as a relatively laid-back trio selection; it reappears several tracks later as a busier solo piece in a different meter. Apparently, Mehldau couldn't contain his feelings about the City of Angels in one song. The closing reprise of both themes only adds to this lingering sense of inner conflict.

Mehldau's endings—on this and his previous efforts—tend to have an almost anti-dramatic quality. There are no big, climactic finishes, exaggerated ritards, or hushed, reverent resolutions that announce when a piece has ended. More often than not, the piece just ends, without any fanfare or obvious set-up. It's as if Mehldau wants to locate the drama of each piece in its main body, rather than resorting to hackneyed devices that force a sense of closure—the ending as punch line. This is one of the most unique characteristics of Mehldau's style. Oddly, it hasn't provoked much comment.