BY MATT MARSHALL
November 26, 2011
Sign in to view read count 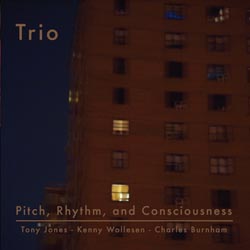 On this ruminative record—and, indeed, it is a record, released primarily on vinyl, with MP3 downloads available—saxophonist Tony Jones, violinist Charles Burnham and percussionist Kenny Wollesen show themselves wholly comfortable within the quiet sonic space about them. Jones is the lead voice—the lead traveler, as it were—working his way across a terrain that is at once wide open and timeless, and newly created by the musicians themselves.

The opener, "Dear Toy," one of two tunes on the record, along with "Bits," directly credited to Jones as composer (the other tracks, presumably, being more or less free improvisational works by the trio as a whole) is also the album's most melodic. It sets a wistful tone of remembrance that dips into depressive blues passages and fits of agitation, and serves as a familiar musical entry into the less structured explorations that are to follow. To be sure, melody resurfaces throughout the record, as do other overtly urgent passages, but on the whole, the album simmers along sonic thought lines that, despite their often languorous quality, pop with human intensity.

Wollesen works with an array of percussive instruments—bells, gongs, rattles, hand drums, warbling sheets of metal—but never touches the drum kit, which would certainly be out of place on this project. Coupled with Burnham, the pair regularly fashions soundscapes that recall Asian music traditions. Burnham's plucking of ringing—startling—single notes, as used to fine effect alongside Jones' low, murmuring tones on "Billie," would be quite at home within a Chinese folk song. "C.K. #1," a duet between violinist and percussionist, is a haunting, psychologically disturbing exchange of gongs and scraping violin.

Jones often sounds like a warbling Beat poet, especially on "Howlin' Wolf," where he preaches fine, gruff, free blues over a wild, rattling field laid down by Wollesen. Elsewhere his passages are more contemplative, with the saxophonist happy to allow quiet spots to seep into his playing or to relegate himself to a supporting role, as he does on "Jessie" by simply intoning a deep, breathy note over and over under Wollesen's percussive forays.

"Four Nights," the closer, brings the album back home in a sense, with Jones opting for the most sustained melodic improvisation since the record's opening. At just under 42 minutes, it's not a terribly long trip from beginning to end, but much shared and contested space is covered. And, befitting music pressed to vinyl, it plays well in repeated cycles.