By Donald Elfman
January 20, 2009
Sign in to view read count

...The same is true with good music--it often seems to be effortless but needs a lot of work to sound that way.
—Jason Seizer

The compilation disc from Pirouet Records is entitled The Best is Yet To Come. That's a startling approach to a collection of music in 2009 because it celebrates both the wonderful music since the label's founding but also confidently asserts that the label will survive. To hear a jazz label at this stage of the game speak about the success of the venture without once bemoaning the state of the industry or the economy is quite extraordinary.

Jason Seizer was a tenor saxophonist and composer who was doing a variety of jobs except, he says, "playing music." One of those jobs was booking the great Unterfahrt club in Munich. A local studio owner, Ralph Burklin, offered him the job of running a studio; Seizer accepted and got experience recording local bands. Soon, the two decided that their passion for music and great recording should bear fruit in a recording venture. The year was 2003 and the first recording for the Pirouet label was by pianist Walter Lang. The album was called Lotus Blossom and teamed the brilliant pianist with bassist Nicholas Thys, drummer Rick Hollander and a most original Japanese singer, Aya Murodate. The result was a fascinating blend of textures and styles that succeeded on its own terms but, even more importantly, set an artistic, sonic and visual standard for this important new label.

One player that Seizer met at Unterfahrt was the Philadelphia-born pianist Marc Copland. Copland says that he was taken with Seizer's seriousness as a musician and in everything he did. "He asked me to record with him and I knew from the start that it would work. I never had to tell him anything about how to record me or us—he was completely tuned into what I was doing musically. It's very clear in everything he does that he and the Pirouet label are into quality music." An early recording of that quality music for Pirouet was the collaboration between Seizer and Copland. Using Thys and Hollander, the two recorded Fair Way, which included originals by both players and a stunning duet on Ellington's "In a Sentimental Mood". 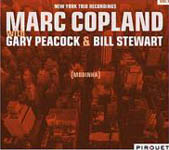 Copland has continued to record for Pirouet. "We came together over a handshake and because we share feelings about making music. It was as simple as that and everything they do—from the music to the engineering to the packaging—is done right." This prolific player—he's certainly recorded a great deal for other labels—is the most recorded artist for Pirouet. He's now done three albums in a series called the New York Trio Recordings. Volume 1: Modinha has Gary Peacock and Bill Stewart; Volume 2: Voices, features Peacock and Paul Motian and Volume 3: Night Whispers, with Stewart and Drew Gress is due out early this year. And with Gress, Billy Hart and John Abercrombie, Copland leads Another Place. In addition, Copland is on all of Seizer's albums and on Tim Hagans' Alone Together. Clearly, Copland and Pirouet are an inspired match.

Copland seems to be the archetype for the label's championing of adventurous pianists. Bill Carrothers has three recordings for the label including fall 2008's Home Row, a sterling session with Peacock and Stewart. The aforementioned Lang did a lovely and intimate duet recording with Lee Konitz called Ashiya, which demonstrates the label's continued fine sense of getting like-minded players together.

Pirouet has 35 recordings in its catalogue with more planned for release in early 2009. In addition to the new Copland, there's a session by Thys called Virgo and follow-up recordings by Friedrich and bassist Henning Sieverts.

Seizer says that sales are up and that one of the ways he keeps expenses down is by keeping the running of the label small. It's basically just Burklin and Seizer on staff. And the consistently simple yet elegant artwork is done by Konstantin Kern of Munich. The label's American distributor is Qualiton but Pirouet also has distribution in Europe, Japan and South Korea. Says Seizer, "Things just keep getting better; our sales, our presence in the market and, of course, the music."