Pieces of a Dream: Pillow Talk

By Woodrow Wilkins
April 6, 2006
Sign in to view read count 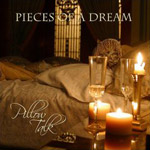 The group took its name from "Pieces of Dreams, the cover of a Stanley Turrentine song it performed in its early years. The band developed a laid-back sound, mixing urban grooves with contemporary jazz in the spirit of Grover Washington Jr., who helped Pieces get started. That style, pioneered by artists like Washington and Bob James, ultimately came to be known as smooth jazz. Pieces of a Dream, now celebrating its 30th anniversary, is one of the genre's most consistent and durable acts.

Pillow Talk opens with the energetic "House Arrest, which features founding member Harmon with Bennie Sims sharing keyboards, bass and programming duties, complemented by Eddie Baccus Jr. on saxophone. One of the more exciting tunes is "Wake Up Call, with a danceable beat that highlights Lloyd's piano skills, supported by terrific horn and bass synths. Harmon adds acoustic drums and percussion, while Todd Parsnow delivers a slick, but perhaps too-brief, electric guitar solo. Romana Dunlap, who has performed with the group previously, sings lead on the sassy "Triflin' and the delightful "Those 3 Words. Tony Watson Jr. brings in a groovy tenor sax solo to "Teresa, an easygoing track that displays hints of straight jazz, particularly with Lloyd's Bob James-like piano lead.

Over the years, I've been critical of drum programming, singling out Lloyd as one of contemporary jazz's main culprits. But there's a distinction between programs created by the album artist and those generated by a hired gun. If the person writing and performing the song also does the programming, the least that can be said is the rhythm is woven into the song, instead of sounding like some pre-fabricated track that happened to match the tempo. The latter is often distracting, if not annoying. Not so with the work on Pillow Talk. The bass synths are very effective, and the drum tracks are cleaner and crisper than typical programs.

Another interesting thing about Pillow Talk is the formulaic running time. The twelve tracks have a variance of only 42 seconds; most songs are just over four minutes. Normally, that makes for a bland album. Not here, however. The songs are so dissimilar that the time is merely an afterthought. Having said that, Pillow Talk is much more enjoyable than 2004's No Assembly Required, which was pleasant but could have been better. Whether it's a change in equipment, better programming techniques or simply fresher writing, Lloyd and Harmon have definitely elevated their game. And because of that, Pillow Talk is a winner.