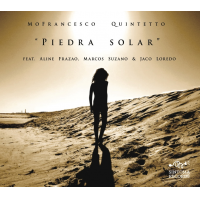 Time was when jazz flirtations with the Iberian Peninsula were limited to the gentle rattle of castanets followed by Rodrigo's "Concierto De Aranjuez" and a feeling you were doing something intellectual. No more.

Francesco Valente cites as a major source of inspiration for this album—a homage to his adopted homeland—Portuguese author Jose Saramago's novel "The Stone Raft," in which a crack appears in the Pyrenees and Spain and Portugal start to drift out into the Atlantic, away from the rest of Europe.

So, while the Italian bassist also includes Andalusian folk music and a Federico Garcia Lorca poem in his tribute, Piedra Solar (Solar Stone) reflects a very modern, fluid Iberian identity that recognizes the influence of the New World, most likely destination of "The Stone Raft."

For a man who is currently studying for a degree in ethnomusicology at the New University of Lisbon, Valente's music is surprisingly down-to-earth and unacademic. "Ala'Ad Din" (Alladin) kicks off with a funky bass riff then segues into full-bodied ensemble work before a fine piano solo by Iuri Gaspar.

"Abraxas" continues in similar style with more good work by Gaspar and percussive effects by Marcos Suzano on pandeiro, a Brazilian hand-frame drum. Suzano is said to have pushed the instrument so far that fans call him the Jimi Hendrix of the pandeiro.

Tres Morillas (Three Moorish Girls), by an anonymous Andalusian poet of the 15th or 16th century, features a stylish vocal by Aline Frazão, a young lady of sultry good looks, best known as a newspaper columnist in her native Angola.

The Garcia Lorca poem, "Vuelta De Paseo" (Return From A Walk) is recited with controlled passion by Brazilian Jaco Loredo. It opens with Lorca making a prophetic reference to being "assassinated by the sky." In reality—less poetically—he was most likely murdered by Franco's fascist thugs. His body has still not been found.

There's a fine interpretation of "Impressiones Intimas, " (Intimate Impressions) by the great Catalan pianist/composer Federico Mompou, before Loredo returns for another impassioned recital, this time of "Aparecio" (She Appeared) by another anonymous Andalusian poet.

A highly listenable and sincere album.