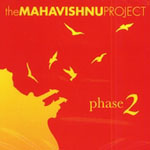 The Mahavishnu Project considers the music from the original fusion gods, The Mahavishnu Orchestra, to be classical in nature. Therefore it is no surprise to see the band put out another CD that features four of the MO tunes that appeared on its first release, Live Bootleg. After all, a classical repertoire is a classical repertoire. The great classical players spend their whole lives "interpreting" the masters' works time after time until they almost get it right. But if you throw in the improvisational aspects that the music of the MO guitarist and founder John McLaughlin's compositions allow musicians, each interpretation may as well be a different tune anyway. When you further throw in nine more inspiring MO pieces and a worthy original that the band didn't cover the first time out, you have Phase Two, the next step in the growth of this remarkable band.

Phase 2 is a two-disc set featuring performances from the Project'\'s 2003 tour. Better recorded than the band's first release, it also is a showcase for MP's new violinist, Rob Thomas, who soars with the wild abandon of Jean Luc Ponty and Jerry Goodman, the two violinists that were integral parts of McLaughlin's first two Mahavishnus. But even more impressive is Thomas' occasional references to L. Shankar, the Indian violinist who was a star from McLaughlin's Shakti band. These moments are fleeting and nuanced, but they add another textural element to this music. Thomas gets it!

Drummer, founder and arranger Gregg Bendian propels the band through two and a half hours of Mahavishnu madness. (A note: I have mentioned in past reviews that I am not a fan of CDs that are too long, as if the artist felt a need to fill every possible second available. I should have been clear that I do not feel that way about live recordings.) Bendian's solo performance on the legendary "One Word" is truly jaw-dropping.

Once again guitar phenom Pete McCann does the master proud. Especially impressive is the necessary restraint he shows on "Sanctuary" until he and the band explode. It seems that keyboardist Steve Hunt may have been under-recorded the first time out. On Phase 2 he is a major force sustaining long and interesting synthesizer runs that add muscle to the early Mahavishnu tunes that were recorded synthesizer-less. He is also especially strong on the Jan Hammer inspired original written by Bendian, "Within the Womb of Night." The Project's bassist, Stephan Crump, serves an important role in this music. It is his job to keep the group centered and to offer help in establishing the low treble of some of the melodies.

These Mahavishnu tunes, as performed by the MP, are as alive and vital as any music being offered on the scene today. Given a chance to be heard, the MP players should take their rightful places not only as fine classical interpreters, but as contemporary jazz-rock stars of the highest order with plenty of their own ideas to push the music even further. I can't wait until they tackle some more of McLaughlin's compositions.

CD1: Resolution; Meeting of the Spirits; You Know, You Know; A Lotus On Irish Streams; Sanctuary; Awakening; Birds of Fire. CD2: Noonward Race; Lila's Dance/The Dance of Maya; Miles Beyond; Within the Womb of Night; One Word; Hope.