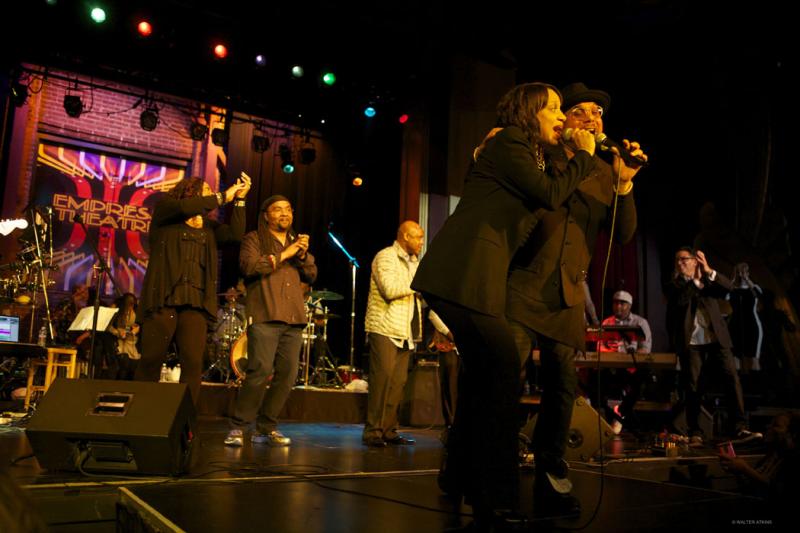 By Walter Atkins
April 6, 2017
Sign in to view read count

His [Peter Michael Escovedo's] Show demonstrated the family spirit and love of the early Bill Graham Fillmore was alive and well.
—Walter Atkins

Peter Michael Escovedo (Kenny G) organized a stellar line up of Bay Area musicians and much more for Voices From The Heart: The Marc VW Benefit at the Empress Theatre in Vallejo CA. Along with many local musicians who contributed their time and resources, the bill featured Howard Hewett (Shalamar), Evelyn Champagne King, Tony Lindsay (Santana) and Vallejo's pride Con-Funk-Shun.

Organizer and music director Escovedo, along with KBLX's Sterling James, hosted the funky, soulful "Show," as Escovedo liked to call it. And a marvelous show it was. The bustling night opened with the All Stars playing Santana's burning version of "Black Magic Woman," and focused on G's wailing guitar solos. Lindsay's moving rendition of Donny Hathaway's, "Someday We'll All Be Free," enthralled the patrons.

Vallejo's favorite sons Con-Funk-Shun tore it up with their ultra funky set including, "Too Tight," the ballad "Love"s Train," and the summer party track "FFun." Attendees were out of their seats with palpable excitement. The band clearly established the jubilant party pace vibe that continued with the other artists.

The night included an auction for a guitar signed by all 30 musicians and vocalists that raised $1,600 dollars to help offset medical expenses for the recovering Marc van Wageningen. When the bidding started to stall, one of the guitarists helped James with an unexpected mile-a-minute auctioneer's voice that quickly got things rolling again. This produced laughter and smiles. For a brief minute, it seemed like Saturday at the local car auction. The friendly volunteer house staff was accommodating throughout the show, led by general manager Kevin Frazier.

With the stamina of two teenagers, King launched her set with powerful vocals that rocked the spot as she high kicked and glided over the large stage. She gave "Love Come Down" and "Shame" lives of their own. King also made a new fan that was impressed by her singing, striding and kicking persona on cute 5-inch heels. For her, King's performance was at the top. King's bouncy session was striking, but then she surprised everyone with her dynamic conga playing. From the conga stand, she calmly shifted to the drums and displayed her competence there too. The audience howled with delight. Watching her incredible vitality level, Escovedo wondered what instrument King was going to play next. King's husband and bassist said he takes vitamins every day to keep up with her. "She's like this every day." Several people merrily commented, "Good time-good vibes."

Hewett sang his Shalamar classics including "For The Lover In You," "A Night To Remember" and "Make That Move." As he sang, Hewett slowly walked into the crowd confidently serenading his screaming fans before returning to the stage. The show's irresistible grooves had the dance area jam-packed with people including this writer and a charming partner. Hewett's lovely duet with Griffith was one of the concert's many high lights. The other artists joined Hewett on stage to close the blockbuster show, and gave the over flowing Empress a benefit to remember.

The Empress's many supporters included Timothy MacDonald, a business owner and generous contributor to the theater. He was with his wife and friends at the well placed VIP tables, and also on the busy dance floor. Rhonda Hicks, social media manager, explained the centrally located facility was originally built in 1911 and had fallen into disrepair over the years. As part of the city redevelopment plan, the first priority was the restoration of the Beaux Arts style theater. The multi million dollar refurbishment took years and included a state of the art sound system, designed by a Woodinville WA company. The massive suspended speakers produced clear sound and were remarkably slim.

After recording and pressing the Raise The Marc album within days of Tower of Power's Marc Van Wageningen's train accident, Escovedo asked his musician friends and family to perform at the event. He mentioned while living in Los Angeles, the celebrated King was his neighbor. The gracious support of Lindsay, Con-Funk-Shun, King, Hewett, and the other artists was immensely appreciated for this special cause. Kudos to Peter Michael Escovedo for bringing together the amazing talent in behalf of an ailing musician. His Show demonstrated the family spirit and love of the early Bill Graham Fillmore was alive and well at the Empress Theatre.