By MARK CORROTO
December 6, 2018
Sign in to view read count 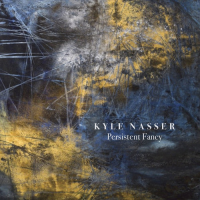 Kyle Nasser's Persistent Fancy is kind of like the old Reese's Peanut Butter Cups commercial, where the two actors protest, "You got chocolate in my peanut butter." and "No, you got peanut butter in my chocolate." The saxophonist's second release, following Restless Soul (AISA, 2015), combines erudite compositions with shrewd improvising. Listeners can decide which of the two are their favorite flavors.

The former Harvard economics and political philosophy major turned musician penned two suites and seven of the remaining eight tracks on this date. His approach is both choreographic and refreshingly spontaneous. His secret, let's speculate, is a well rehearsed band and some talented musicians. Nasser employs the formidable alto saxophonist (Roman Filiu ( Henry Threadgill, David Virelles) as a complement to his tenor and soprano. The pair execute Nasser's writing and arranging, but the thrill here is their work off the written page with "Baroque Suite III Improv." The music can be intricately developed, as on Paul Hindemith's "Arioso," with some introspective soloing by pianist Dov Manski and bassist Nick Jost. It can also be extroverted, as in the rapid-fire conversation on "3-Way," where Nasser's saxophone ricochets off Allan Mednard's drums, before guitarist Jeff Miles opens up his bag of shred. It is easy to imagine this music played in both the chamber hall and the jazz club, satisfying to most because Nasser's writing and performance are two great flavors that taste great together.