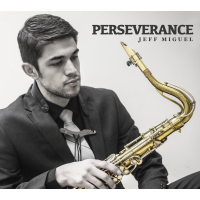 Armed with a recently-received Master's degree in Music from the University of Iowa, young tenor saxophonist Jeff Miguel enters the world of recorded jazz with an impressive debut album entitled Perseverance, an offering of eight originals forged in the mainstream, straight ahead fashion containing elements of the smooth, Latin and other flavors. Originally from northern Illinois and currently residing in Iowa City, IA, Miguel is an educator and former co-director of the University of Iowa Hawkeye Big Band as well as being an integral part of the Iowa City jazz scene. Inspired and influenced by legendary jazz artists from Quincy Jones to John Coltrane, Miguel seems to be a technician with the reeds, wielding an expressive saxophone like a seasoned veteran poised to establish himself as musician of note.

In launching this very first effort, the artist performs in various quartet, quintets and one sextet formats using faculty and graduate students from the University of Iowa as well as local professionals with drummer Brian Zeglis and bassist Blake Shaw anchoring the rhythm section. The band changes on different tracks using two different keyboardist, a guitarist, an alto saxophonist and trumpeter Courtney Jones on the opening piece. The title piece begins the music showcasing Miguel and Jones blowing hard on opening chords. The smooth-styled "Perseverance," which also features Jon Snell on the keyboards, moves along on the steady drum beats from Zeglis and opens the door for some hard-boppish solo moments from Miguel ably demonstrating this saxophonist's chops on the instrument.

The following "140 GeV" seems to pick up where the opening tune leaves off except for features from guitarist Dan Padley and keyboardist Grace Leong while "Complete Contemplation" highlights the leader and Snell on a soft and gentle ballad. One of the defining pieces of this disc has to be, the Latin-tinged burner "Puerto Baquerizo Moreno" named after the capital of the Galapagus province, Ecuador. On this outstanding number, the leader is heard on the alto blowing hard and high while drummer Zeglis is featured well on the most percussive piece of the set.

From the funky, perky sounds of "Making It Plain!" the music moves to the alluring "Lingering Allure," which features the leader paired up with alto saxophonist Ryan Smith as the duo deliver cleaver and delicious solo statements making this tune, one of the keepers of the session. The original "Requiescene," begins in a downtempo melancholy manner but changes direction quickly and lightens up to set the stage for the restless and bouncy finale of "This Time."

They say that "perseverance" with anything, eventually pays off in the end and so, one supposes that with the hard work saxophonist Jeff Miguel has most assuredly put into this excellent debut, the superb musicianship and creative compositional make up of Perseverance, is not just an attention-grabbing statement but, a solid foundation from which to build a musical career that hopefully, will produce more of the caliber of jazz contained here.