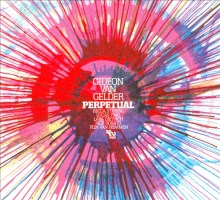 By implementing diverse styles without being confined to any particular one, pianist Gideon Van Gelder provides stimulation for the mind and ear with Perpetual. Categorizations are meaningless yet intriguing, displaying swatches of Van Gelder's open concepts, Third Stream, and lessons probably garnered from New York's New School for Jazz and Contemporary Music, which Van Gelder attended in 2007. Regardless of the influences (ranging from the multidisciplinary works of Meredith Monk to Brazilian guitar virtuoso Toninho Horta), his compositional approach is quite intriguing.

The momentum of "Wave"—a four-bar phrase broken up in a somewhat unconventional way—emerges like a tsunami, carrying sheets of sound from Van Gelder's keys, wordless lyrics from Becca Stevens, and lightning runs from saxophonist Lucas Pino. But things calm dramatically in "Glow," which casts a light on some intimate trio interaction— the pianist's delicate keys, Flinn Van Hemmen's soft cymbals, and resonant bass movements from Rick Rosato. The shifts in mood and rhythm throughout the entire set are both thoughtful and thought-provoking.

The young artists perform remarkably, the piercing statement of rising alto saxophonist Lars Dietrich, on the mesmeric title track, incorporating elaborate yet subtle execution. Stevens' airy vocalizations are heavenly in "Lullaby," as her voice dances in harmony with the piano, before Van Gelder and Pino offer their own deliberations on the lofty theme. Intuitive, balanced, and symmetrical; it is a perfect example of Van Gelder's writing.

If there's an acknowledgment of the cannon of jazz composers, then Joe Henderson's "Inner Urge" does the trick; the group swings proud and true. But Van Gelder's charts leave the lasting impression. Whether the solitude and minimalism of "Arctic Queen" or the intricate working of "Who Afraid of Red, Green, and Bright Light?," with its cyclical shifts, each track exposes a promising pianist/composer with fertile ideas.