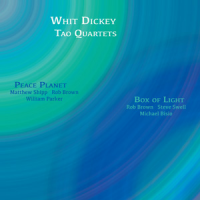 Shimmering contrasts and flights of fancy await the listener of these fine sets of free playing put together by primary composer and drummer extraordinaire Whit Dickey. Available as a double album, Dickey's Tao Quartets' Peace Planet & Box of Light is really two separate albums. One, (Peace Planet ), features a quartet of Dickey, Matthew Shipp on piano, Rob Brown on alto saxophone, and William Parker on bass. The other, (Box of Light ), replaces Shipp's piano with Steve Swell's trombone and replaces Parker with bassist Michael Bisio. So, while the spontaneity and quality are maintained across the two groups, the use of different instruments opens new musical vistas.

Of course, to command such incredible and awesome talent over two ensembles is impressive on its own, but the 65-year-old percussionist remains dedicated to a vision of collective improvisation that centers on his own original compositions as interpreted through his ensembles. In general, along with an abstract stream of consciousness, there is an organic feel about these compositions. The music fills the space like water flowing over stones.

A unique voice on alto, Brown shines in both quartet configurations. On Peace Planet, his soulful and muscular legato arcs are complemented by the bluesy, modal and freewheeling Shipp. But Shipp has more to say—listen to his racy solo midway through "Seventh Sun" or his introspective ruminations on "Ancient Monument." Parker is not to be left out. His rumbling and breathtaking splurge of notes on the masterpiece "Suite for DSW" (the DSW stands for David S. Ware, the late tenor saxophonist wizard who left a lasting influence on Shipp, Parker and Dickey) is a case in point. Dickey's drum work on this set is both rhythmic and arrhythmic, and his forceful and lively accents are always in the right place at the right time.

On Box of Light, Brown's jagged articulations, twirls, and moans (check out his solo on "Jungle Suite") meet Steve Swell's brawny and rousing trombone, and both musicians cover a lot of emotional ground. Dickey seems to explode at times, his drums emphasizing irregular beats with a strength of purpose. Bisio uses techniques like rolling plucks, thumps, and bowing (his solos on "Ethereality" or "Box of Light"—where his bowing literally takes over the piece—are prime examples) to provide a fluid, intense and deep bottom to the compositions. On "Ellipse: Passage Through," Dickey's aggressive impulses across the trap set (especially his bass pedal work) under-gird Brown's squeals and Swell's outbursts and, after a brief solo, he provides sweeping accompaniment to Bisio's neck-covering efforts.

It is not difficult to place Peace Planet & Box of Light at the top of this year's recordings. Like his album Vessel In Orbit, Dickey proves again that cerebral, abstract, and penetrating music is a key ingredient of vibrant jazz and works of art.