Home » Jazz Articles » I Don't Fit In: My Wild Ride Through the Punk & Power Pop Trenches...

By Doug Collette
January 23, 2021
Sign in to view read count 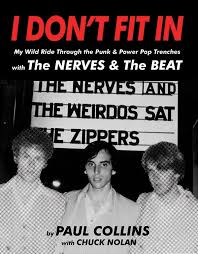 Paul Collins' memoir I Don't Fit In is not expressly designed to be a companion piece to his archival release Another World: The Best of the Archives (Alive Records, 2020) but it works that way regardless. My Wild Ride Through the Punk & Power Pop Trenches with The NERVES & The BEAT could well have been the title of his collection from the vault and vice-versa because each evokes a similarly visceral reaction.

It's confounding to acknowledge that Collins has missed widespread success by the same razor-thin margin not once, but twice. Just as he remained obscure as a member of the Nerves (with current Americana icon Peter Case and Jack Lee who (inadvertently?) wrote for Blondie's hit "Hangin' On the Telephone"), so he did fronting his own group The Beat (after a minor skirmish at the outset with the British band of the same name). Being a little ahead of their time in the former group (where he actually played drums) might account for that misfortune, but it's difficult to rationalize the fall through with the latter having been managed by the late rock impresario Bill Graham and reaping (at least to some degree) the benefit of major label resources to underscore that very relationship.

Therein perhaps lies the meaning of this book's title. There's a difference between making a place for oneself and finding a place for oneself and it's difficult to discern which applies to this writer until well into I Don't Fit In. Flyers the likes of which densely populate these two-hundred seventy-four pages depict his bands on bills with the seminal punksters Ramones and the Jam, so why such exposure wasn't magnified to its fullest extent remains a mystery, at least to the extent Collins describes the extenuating circumstances. The level of detail here suggests the kudos Paul offers co-author Chuck Nolan are indeed deserved (especially as the end result prompted such an articulate foreword by drummer Ric Menck, long-time collaborator with Matthew Sweet).

Given the near-fifty years of Paul Collins' career, it should probably come as no surprise that the native New Yorker (and subsequent globe-hopper with his family to Vietnam and Greece) composes prose the way he writes (and plays his) songs. That is to say, the words come in short, sharp bursts, the brevity of which belies their insight and significance. And the design of My Wild Ride... is an extension of that style, as represented in microcosm by its front cover: festooned with a multiplicity of fonts and interspersed with graphics that include staged and action photos, reproductions of memorabilia, press clippings and letters business and otherwise (all from the author's own archives), this is one paperback that comes close to being a multi-media display (as such it would be ideal in digital form including music a la George Gruel's Lawyers Guns & Photos: Photographs and tales of my adventures with Warren Zevon (Big Gorilla Books, 2020)).

It should then come as no surprise (at least to his fans) that, as is also the case with the man's albums, a cumulative momentum grows as the chapters pass. Accordingly, by the time 'Part 3: The Beat' arrives, the suspense is sufficiently palpable that even the most devoted, long-term Paul Collins aficionados—who already know this story line—will succumb to extended sessions of reading. What at first sounds like the archetypal tale of abiding ambition for stardom gone awry, slowly but surely and almost but not quite imperceptibly, turns into a deeply personal tale of resolute individualism.

The jarring account of the fumbling sequence of events that comprised Collins' duo tour with Case in 2012 might well leave even the most thick-skinned reader extremely enervated. As it rightfully does the author, but no less so than the aborted collaboration on a movie with Lee (who the author continues to idolize even in the wake of the debacle). And yet those exercises in futility may be the most vivid examples here of the Collin's more than slightly serendipitous approach to life, one in which he virtually always kept playing, except for one truly down and out interval in the wake of 9/11 where he retreated to one of his favorite locales in Madrid, Spain.

Paul Collins makes no apologies for speaking as forthrightly as he does telling his story. In fact, his fundamental attitude simultaneously proud and unapologetic as it is makes the very title I Don't Fit In sounding like nothing so much as a boast. Which is perfectly appropriate because My Wild Ride Through the Punk & Power Pop Trenches with The NERVES and The BEAT shatters archetypes to reveal the truth(s) at their core.

About The Paul Collins Beat