We are all much closer to each other than we think.
—Luke Owen

"Will this wonderful civilization of today perish? Yes, everything perishes. Will it rise and exist again? It will—for nothing can happen that will not happen again. And again, and still again, forever. It took more than eight centuries to prepare this civilization— then it suddenly began to grow, and in less than a century it is becoming a bewildering marvel. In time, it will pass away and be forgotten. Ages will elapse, then it will come again; and not incomplete, but complete; not an invention nor discovery nor any smallest detail of it missing. Again it will pass away, and after ages will rise and dazzle the world again as it dazzles it now.—perfect in all its parts once more. It is the Law of Periodical Repetition."

Digital is the common means of music in this twenty-first century. Compressed streaming signals deliver so much of the soundtrack of our lives. We're all sheltering in place during this last year, alternately workin,' steamin,' cookin' and relaxin' with bassier bluetooth speakers and smarter televisions.

The brick and mortar record store is presently an endangered species. While the recent rise in vinyl sales sparked a renaissance of independent shops, those same businesses are now largely holding on for dear life, and there hasn't been a new giant retail catalog chain a la Tower with the wherewithal to survive such lean months as we are experiencing in this covid age.

The jazz public has always had to work a little harder. In those difficult pre-Tower/pre-CD years, those of us who lived in or near a city went to specialty stores. If you didn't have one nearby, maybe you had EJ Korvettes, a budget department store chain with a record department incredibly well-stocked with jazz, classical, folk, and classical titles on labels whose names were always in the late, lamented Schwann Record And Tape Guide (a venerable and comprehensive mail order catalog) but not otherwise common to suburban shopping centers. Sadly, they folded in 1980.

Bandcamp has become an online destination for those who actively love collecting music. Not only is it easy to use, but it does a great job of notifying music buyers when labels or artists have a new release. It is searchable by keyword, personnel, and any other usual means. Pretty much everything is available digitally, but many if not most labels in Bandcamp still do hardcopy.

It was there I stumbled onto the English label Death Is Not The End, one of the more compelling discoveries I've made since being largely confined to my tiny Hollywood apartment. While the average American thinks of "roots music" as being blues, country, early jazz, and the various tributaries of that stream, the rest of the world has its roots music as well. Several labels—DINTE, Olvido, Canary, and the influential but publicity-shy Mississippi —have in the last few years stealthily cast the bread of pre-1960 international roots music on the waters with a post-punk DIY aesthetic and a proselytizer's zeal. This music is brought to you by true believers. 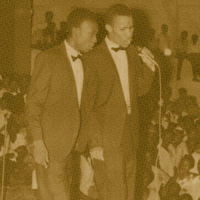 DINTE is run by Luke Owen, a 33 year old native of Bristol, a city whose notable contributions to the world include Wallace and Gromit, the influential post-punk Pop Group (which spun off into Pigbag and Rip, Rig and Panic), Tricky, Robert Wyatt, Andy Sheppard, and the famed bederbied trad-jazz icon Acker Bilk. Owen's releases include American blues, gospel, sacred harp, prison field recordings, Greek rembetika, Jamaican doowop, thirties Finnish, early Cajun, something that sounds almost like Persian country blues (the intense and mind blowing Aziz Balouch), and even English pirate radio from the eighties. None of this is on compact disc. He generally issues cassettes that sell out quickly and are subsequently available only as downloads, although recently there is some vinyl, and his pressings are very nicely minted.

"I don't have much of an interest in CD as a format and tend to prefer cassettes and vinyl, and eschewing the CD," Owen explains. "I might not rule it out completely, perhaps for a box set or something in the future, but in general I don't think it suits the releases and the lo-fi nature of archival audio works much better on tapes and LPs."

DINTE is not only a label but also a monthly online radio show that is not to be missed. The American gospel shout of O.M. Terrell, the driving Jamaican R&B of Owen Grey, and the near-eastern virtuosity of Russian ored musicians all have a home here. Citing Folkways Records (which began life as the "Folkways Ethnic Library" in 1948) as his chief inspiration, Owen echoes that venerated label's ethos in his own approach.

"The notion that we are all much closer to each other than we think is often what drives the philosophy, if there is one, behind the label's output and the monthly radio show. The connection is between people and the music reflects that, I believe. "

While Dust To Digital has been able to offer up museum-quality archival world music packages, as has Jack White's Third Man imprint (which is a wonderful surprise), labels like DINTE and Canary have an almost punk rock approach, with highness of fi taking a backseat to their need to find missing music of marginalized communities, then make sure it's not lost. Owen's approach owes more to precedent-setting early '60s compilations like Pete Whelan and Bill Givens' Really The Country Blues, as well-selected a set of rough gems as ever pressed onto vinyl. Whelan and Givens' Origin Jazz Library imprint was as influential as the Harry Smith volumes that Folkways put out, complete with cheap, stark graphics and mimeographed liner notes are as protopunk as it gets. Likewise, Arhoolie Records—helmed by the legendary Chris Strachewitz—made a mark on Owen as well, but not before his own father's record collection affected him.

"My dad's Pentangle and John Fahey records... I remember The Transfiguration of Blind Joe Death. I was drawn to the cover as a kid thinking it must be some heavy metal that I can blast. Digging into Folkways' stuff came a bit later. It might seem odd to you folks on the other side of the pond where I'm sure the record bins are regularly full of those records, but it's a fair bit harder to come across over here. I think it it will have been the Harry Smith Anthology [Of American Folk Music] that first drew me and remains a big influence on the label. The Lomaxes especially influenced me, and Arhoolie too, of course. The philosophy of an American patchwork strikes a chord with what I am inspired by on a global level, and a social history level too."

Owen also mentions the British label Topic, whose catalog is to British folk approximately what Blue Note is to hard bop. But when asked the focus of his early involvement with music, his answer is decidedly non-folkie.

"It was all reggae/dub & jungle/drum and bass for those coming of age in the 90s. I was buying records from a young age in Bristol, south west England. It started with mid to late 70s dub and rockers on LP and 45s, but has taken in a fair whack of 60s Jamaican recordings from gospel to rocksteady. I actually will have come across a lot of it early on via local pirate radio stations and also the sound systems that would play at the local carnival. Reggae has always been a fairly big thing there, similar to London." (Sound systems are enormous portable outdoor set-ups that have been part of reggae culture since day one. Imagine a very competitive travelling disco.) His affinity for pirate radio— long a staple of the British music underground—has resulted in DINTE's latest cassette release, London Pirate Radio Adverts 1984-1993, Vol. 1. Owen was effusive when I told him it reminded me of Tony Schwartz, the American sound archivist whose landmark fifties recordings included Nueva York: A Tape Documentary of Puerto Rican New Yorkers and Sounds of My City: The Stories, Music and Sounds of the People of New York, as well as notable recordings of the celebrated New York composer/street musician Moondog.

"I'm super happy that it evoked Tony Schwartz for you, that is exactly what I was looking for. I've long been recording street sounds around London (preachers, chatter, sound systems etc) with the intention of sequencing them in a very Schwartzy way too. I never seem to get round to doing so."

We are in an age of virtual hunting and gathering, both because the pandemic has forced us to stay put and because online listening/shopping has become so usual, making labels like DINTE more viable. Their costs per release are certainly lower, for one thing. But also, they're attracting a clientele of active (and even captive) listeners who crave the results of a deeper dive.

As I stare across the room at my music shelves, not only do I see the types of records (and CD's) this article mentions, but the work of amazing forebears ranging from Louis Armstrong to Elis Regina, Ray Barretto, Bill Monroe, and beyond. The past has never been more available to us, and never more for the right reasons. And because of the ingenuity, humanity, and taste of obsessive record folk like Luke Owen, things presumed lost—if they were even at all remembered—are finding new life in the world, at a time when the best thoughts of mankind have never been more sorely needed.

"We steeped our thirsty souls in the reviving wine of the past, the pathetic past, the beautiful past, the dear and lamented past; we uttered the names that had been silent upon our lips for fifty years, and it was as if they were made of music; with reverent hands we unburied our dead and caressed them with our speech."