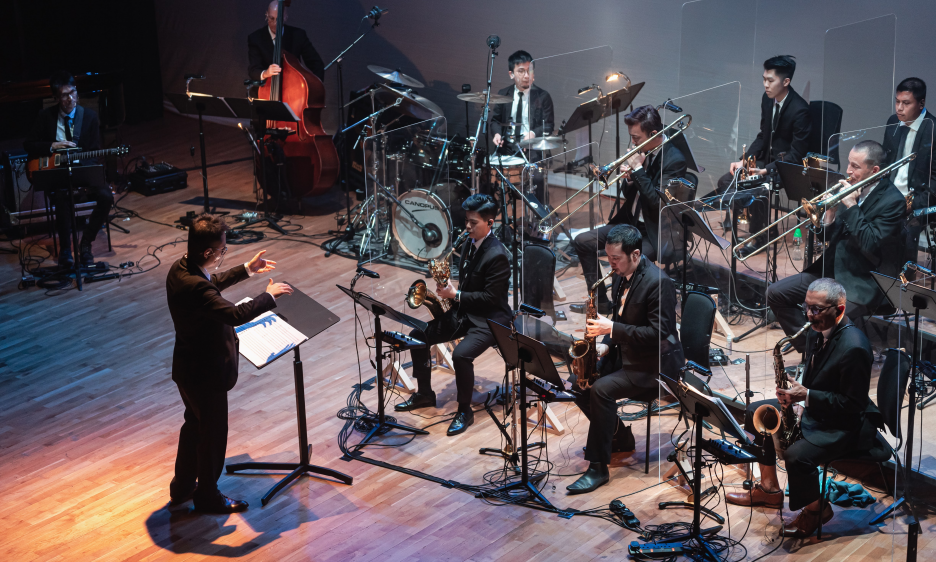 Yes, that date above is correct—and if the world's ongoing global nightmare has offered any relief to musicians of late, it might be the fresh appreciation afforded often overlooked players in their own communities. Nightlife and concert venues may be tentatively reopening, but while travel and quarantine restrictions remain, who else is going to play them? The spotlights are making a welcome inwards turn.

That's been the case here in Hong Kong, anyway—and it was a canny bit of programming to present Patrick Lui as part of this year's French May festival (the twee "Le" prefix mysteriously dropped for this 29th edition). The homegrown pianist/bandleader was tasked with arranging famous movie themes (and in one case writing his own "inspired by"), for a big band for a program entitled Jazz in French Film—a task that might have been tedious for some, but was dealt with seriously and swingingly by the seasoned Berklee graduate, who brought welcome flair to both his song selection and orchestrations.

The music was employed alongside fitful silent movie visuals projected behind the suited, booted, 13-piece ensemble—best and bravest of all was treatment of Louis Malle's moody 1958 noir Elevator to the Gallows (Ascenseur pour l'échafaud). Instead of even attempting to transcribe the swaggering sexiness of Miles Davis' famously improvised score, Lui simply chose to have his horn section and drummer play along with it—moody brass spurts and blurts playing cat and mouse with Miles' lead lines, while a lovesick man and woman mouthed breathy sweet nothings into opposite ends of a telephone —an engaging exercise which only truly underscored the beauty of the original recordings.

Bigger crowd pleasers were inevitably found in the theme to kooky cult classic Amelie, "I Will Wait for You" from Michel Legrand's score to The Umbrellas of Cherbourg and the lively bossa theme to Summer of '42, which collectively served to flex the band's musical chops, swinging hard and sprinkled with sparkly solo turns diligently divided between the nine-piece brass section. However, greatest applause greeted a surprise encore performance of the theme to Wong Kar-wai's In the Mood for Love—arguably the Hong Kong film most internationally adored—set to fresh French lyrics performed by South African vocalist Talie Monin. A proud, pertinent local reference at a time when the (self-governed?) city needs it most.

The set marked an interesting juxtaposition to pianist Ted Lo's performance alongside the Hong Kong Philharmonic Orchestra on the same stage just 12 days earlier (not least because Monin also made a guest turn). Thanks to a 17-year stay in New York, including stints with Ron Carter and Herbie Mann, Lo is widely recognized as the city's older statesman of jazz—alongside fellow traveler, guitarist Eugene Pao—and it's worth noting that this unlikely engagement alongside a 30-ish strong string section from the city's flagship orchestra was on the calendar a year ago, a pleasant oddity between the many international classical stars who would never make it to the city due to the pandemic.

But still, it was a rare spotlight for a gigging musician more often found playing in the closest that Hong Kong has to a jazz club. Lo doubtless felt it necessary to include the standards "Summertime" "Bewitched" and Lennon's "Imagine" in the mix—each offered to a different guest vocalist, serving to highlight his lesser-known experience as an arranger of lush Cantopop balladry—but it was his five instrumental originals that really deserved this rare big stage treatment; most especially the McCoy Tyner tribute "Song for McCoy" and the spiraling, epic closer "Another Journey," which inevitably sounded fieriest when the composed string segments broke away to unleash Lo's core trio in thrilling improvised explorations. We can only hope Lo gets to record these smart and worthy arrangements with these musicians soon, brightening the international spotlight on this overlooked hometown hero.