By Phillip Woolever
February 15, 2010
Sign in to view read count
Pat Metheny Orchestrion
Frits Philips Music Center
Eindhoven, Netherlands
February 12, 2010
How much soul can you get from a solenoid? Plenty, if you're guitarist—and now orchestrion arranger—Pat Metheny.

Soul had been the subject separating hope from hype as Metheny's Orchestrion Tour started to roll across Europe. News coverage of Metheny's recently released album—Orchestrion (Nonesuch, 2010)—provided considerable marketing impetus and Metheny's instincts have taken it from there. This is a project where masterful mechanics are both noun and verb.

Despite an abundance of media coverage regarding the album, initial concert performance news was minimal. Anticipation was high. Well before the show's scheduled start dozens of people leaned against the stage and examined what instruments were visible—most remained hidden under an attractive burgundy cover.

Metheny walked onstage to a heartfelt roar, embraced a custom Manzur guitar and began to demonstrate how raucous stimulation can work both ways across a seemingly endless, universal landscape.

Metheny made a stirring personal statement on almost every instrument or mechanical family he played, opening with an enhanced "This Is Not America." The purest moment of the night may have been "Song For The Sons." It was only Metheny's second song but he swung for the fences immediately, offering excellent solo examples of his biggest bangs as a risky standard for the later Orchestrion set to match. Metheny used the Pikasso guitar's three necks to create his own universe in "The Sound Of Water" and the assembled audience of around 1,300 would probably have gone home happy at that point.

That the Orchestrion set, which ran about 90 minutes, compared favorably with preceeding songs is primarily testimony to Metheny's wide ranging talent, but the array of gadgets established a stage presence of their own. It was a mix of bells and whistles and percussive passion. For all the futuristic talk about the orchestrion as an evolving technical entity, the project remains quite traditional. Therein lies much of its charm.

"I appreciate you all taking a chance and coming to this gig," Metheny told the audience. "You didn't know what to expect, and I didn't either. This has been a very interesting year for me." 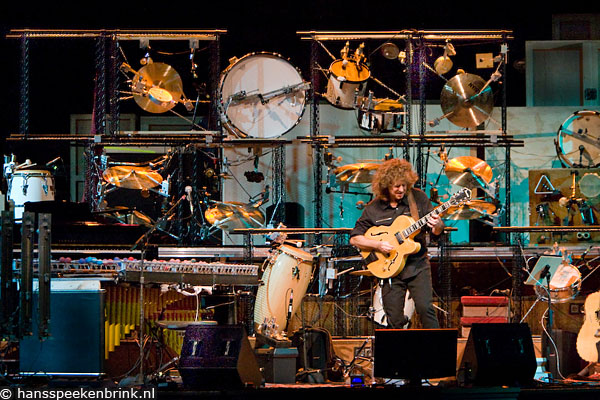 Reportedly, Metheny has been changing the mix of movements during what he referred to as "the suite." Tonight he closed with "Soul Search" and summed up a convincing argument for the art form. It was a relief for those challenged to distingush all five movements when Metheny detailed how each piece was designed to be interchangable.

A pair of encores, "Stranger In Town" and "Suenos Con Mexico," concluded what had been around two hours and fifteen minutes of bliss.

The Yahama piano sounded great in a life of its own, but some of its notes and the bass should really be called preprogrammed. Maybe the answer to the orchestrion's validity as a "live" experience depends on your perspective on spontaneous activity. Judging by two standing ovations, the perspective, in Eindhoven anyway, appears unanimous and very positive.

The main point of this and his many other excursions is how Metheny remains an excellent, exploring artist, whatever the context. This time when he played the hell out of his guitar; it seemed like he had both invisible robots and hard to miss humans behind him.

"I'm surprised you guys aren't on The Discovery Channel," Metheny joked regarding the town's full-tilt party mode. "This is the first time I've been able to play more than just one night in Holland. I love it here."

It was an easy night to enjoy, in a great hall, in the center of a charming city during crazy Carnaval days. The jazz crowd blended well with hundreds of costumed revelers and dancers throughout surrounding streets. After the concert thumping beats echoed into the clear, chilled sky. Somewhere up there Pat Metheny's Orchestrion joined a galaxy of greatness, as he continued among the brightest stars.