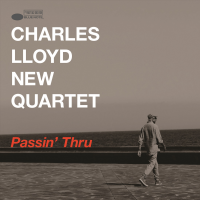 Admit it. You were wondering if Charles Lloyd's post-millennial quartet was no more. Am I right? We haven't really heard from that group in a while, so nobody could blame you for thinking it.

When Lloyd made the jump to Blue Note Records in 2015, his opening salvo came in the form of a six-part suite that brought him into contact with a new crew that blended Greek mysticism and jazz currents in equal parts; then, when he delivered I Long To See You (Blue Note, 2016), we were introduced to The Marvels—a guitar-centric outfit that paired him up with simpatico sound mate Bill Frisell; and finally, as the unthinkable happened when Donald Trump took office, Lloyd stood up to be counted on by adding Lucinda Williams' voice to the sound of The Marvels for a stand-alone single covering Bob Dylan's "Masters Of War."

Each and every one of those releases reaffirmed Lloyd's status as one of the great communicators and spiritual explorers of our time, but none of them featured the so-called "New Quartet" that became his post-millennial flagship ensemble. Could that band be no more? Was the start of Lloyd's Blue Note era the mark of the end of an ensemble? Both were reasonable questions to ponder, given the information above, but Lloyd has allayed our fears by giving us Passin' Thru. His New Quartet is alive and well here, celebrating ten years of magic and music with this probing and pleasing live album.

The seven songs presented on Passin' Thru are indicative of the deep connections forged between these four men over a decade of exploration. When Lloyd takes flight with pianist Jason Moran, bassist Reuben Rogers, and drummer Eric Harland by his side, there simply are no limits. These four harness the light and move through the darkness without fear, soaring into the heavens and plumbing the depths with a tremendous sense of curiosity, confidence, and candor. With the classic "Dream Weaver" comes rubato rumbles, scampering piano abstractions, cool rivers of sound, and deep dream states; on "Part 5, Ruminations," the entire outfit charms us with responsive telepathy, Moran takes us on a trip to remember, and Lloyd meditates and gravitates; in "Nu Blues," spang-a-lang sounds settle on the dirt, bringing earthy concepts into contact with some grit and grime; and with "Shiva Prayer," Lloyd and company drink from that meditative well that they know so well, hydrating souls and spirits in the process. There's a reason that this band is one of the most celebrated ensembles of our time, and it's connected to its seemingly self-contradictory skill of knowing how to hold on and let go all at once. That gift is there to see and hear in every performance on this album. This band may just be passing through life like the rest of us, but it's most certainly made its mark in the process.

Dream Weaver; Part 5, Ruminations; Nu Blues; How Can I Tell You; Tagore on the Delta; Passin’ Thru; Shiva Prayer.