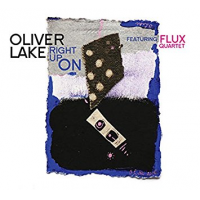 Although he will always be known first and foremost as an uncompromising saxophonist who helped catalyze the jazz avant- garde from the 1970s onward, it's also worth recognizing Oliver Lake's ambition as a composer. He has a particular fondness for strings in this regard, actually, as he has composed extensively for string quartets for over twenty years, starting with his String Project on Movements, Turns and Switches, from 1996 on his own Passin' Thru label. But most of his work in this area has remained under-recorded; this current release is an attempt to rectify the situation, with the help of the daring, supremely skilled contributions of the FLUX Quartet.

There have been a number of chamber ensembles in contemporary classical music that have shown willingness to work with jazz-based improvisers: a couple of the more notable examples include the International Contemporary Ensemble (ICE), which has performed and recorded with drummer Tyshawn Sorey and pianist Vijay Iyer; and the JACK Quartet, recently featured with the Le Boeuf Brothers on 2016's Imaginist. As is evident from its work here, the FLUX Quartet can clearly hold its own with the best of these ensembles, as demonstrated by the malleability and energy its members bring to Lake's challenging and difficult compositions. This is not easily-accessible music. It demands a lot from the listener, but it also offers a terrific opportunity for the FLUX Quartet to showcase its distinctive chance-taking sound and impressive instrumental feats.

One thing that's worth mentioning right off: although the record is rightly listed as Lake's since the seven pieces are his compositions, those expecting to hear much of Lake's alto saxophone will be disappointed. He's only featured on three of the pieces, and on one of those ("Disambiguate") he only comes in on the last minute of the seven-minute track, almost as an afterthought. He does play a prominent role on the record's second track, "5 Sisters," which perhaps non- coincidentally is one of the most infectious pieces on the album. From the beginning of the piece, Lake establishes himself as a dominant voice, in the process coaxing some of the FLUX Quartet's most dynamic and invigorating playing on the album, as the synergy they develop with Lake is gripping. But again, those moments on the record are relatively rare; interested listeners should approach this album principally as a chance to hear Lake's compositions as performed by FLUX.

To be sure, the rewards of listening to this fine ensemble are significant. The members of FLUX bring a fresh creativity to their playing, as one hears in particular on "Einstein 100!," a 20-minute journey in which the ensemble explores subtly composed chamber passages, unstructured free improvisation, and moments for each member of the quartet to have some solo space as well. The music is highly abstract: those hoping to hear jazz or blues-based idiomatic elements in Lake's composing will not find them here. But there is a logic to Lake's knotty compositions, and his ability to give the quartet room to find improvisational space from within the complexities of the music is noteworthy. On pieces like "2016" and "Sponge," the members were given only graphical notation, and their ability to utilize that freedom while merging their individual voices reveals their technical brilliance and their empathetic powers as an ensemble.

Those attuned to the exciting possibilities of contemporary classical music will find a lot to like here. At the same time, based on the results of Lake's vigorous engagement with the quartet on "5 Sisters," it would have been an even better record with more of Lake on it. The five musicians together can generate a lot of excitement, and perhaps in future iterations of this project we'll get to hear more of it.