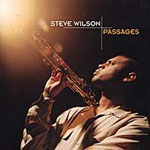 Among some talented peers that would have to include Kenny Garrett and Jon Gordon, Steve Wilson is arguably one of the best alto saxophonists on the scene today. But it goes beyond that, because he has also established a unique approach to the soprano saxophone as well as the flute. Following his four decidedly mainstream affairs for Criss Cross and his first effort for Stretch, Generations, Wilson's sophomore release for Chick Corea's imprimatur is surely his most realized project yet as a leader. Both in his writing and playing, not to mention the company he keeps, Wilson has arrived at a mature and stimulating apex that fulfills the potential that has been evident in his work since his debut in the mid-80s.

. There is much variety to be found here, although Wilson manages to present this well-rounded picture without the whole sounding like a disjointed and patchwork quilt. The three tracks featuring Nicholas Payton cover quite a range in themselves, from the bop-inflected "Turnin' the Corner" to the expansive "Q-B-Rab." The latter starts with a funk groove only to develop into sections of swing and free moments with Payton's trumpet and Wilson's alto exchanging explosive banter.

An agreeable bossa/Latin influence can be felt elsewhere, with Adam Cruz adding percussion to his trap set work. "Song for Anna" features Wilson's pensive flute on a nimble melody, supported beautifully by Bruce Barth's use of a Fender Rhodes electric piano. The Rhodes shows up again for Keith Jarrett's classic "Days and Nights Waiting." The short interludes "Roots and Herbs" and "Wilsonian's Grain" are essentially percussion workouts that create a tasty segue between the other tunes.

The integration of the ensemble is particularly strong, although Wilson gets the lion's share of the solo spotlight. As strapping as his work is throughout, it might have been nice to hear a bit more from Payton and Barth. Regardless, Passages is prime Wilson and bodes well of his staying power and future development as an artist.