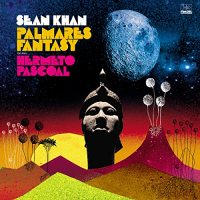 Palmares Fantasy is the fifth album to be released by British saxophonist Sean Khan under his own name or as the leader of SK Radicals. Like its predecessors, it is a blinder, in touch with the jazz tradition while absorbing influences from beyond it and wearing its political heart on its sleeve. The music is characteristic of Khan's wide-angled aesthetic. To make it, he travelled to Rio de Janeiro to collaborate with fellow outsider, multi-instrumentalist Hermeto Pascoal, and other luminaries of the Brazilian music scene, and took the album's title from a settlement established by escaped slaves in northeastern Brazil some 400 years ago. Khan's liner note for the title track observes that while most of Palmares's population was made up of ex-slaves, many deserter conquistadors also joined the settlement, making it a rainbow-hued community of rebels. The album is a utopian jazz message for a world in crisis, spiritual jazz informed by samba's revolutionary tradition. Despite his talent, Khan remains strictly niche. Partly, this is of his own making. Partly, he is regarded as too subversive by Britain's jazz establishment. Khan is a largely self-taught musician. He was unable to afford his teenage dream of studying at Boston's Berklee School of Music, and was rejected by London's Guildhall School of Music for being "too raw." He became disillusioned with the exclusivity and institutionalisation of the jazz world, but his love for the music remained and he taught himself alto and soprano saxophone, clarinet and flute. Pascoal, who Miles Davis once called "the most impressive musician in the world," is another self-taught maverick. The two autodidacts make a dream team here and the rapport between them is brilliantly showcased on the unaccompanied, free-rhythm duet, "The Conversation." Other guests include, from Brazil, Azymuth drummer Ivan Conti, bassist Paulo Russo, nu-bossa vocalist Sabrina Malheiros and Cinematic Orchestra frontswoman Heidi Vogel and, from Britain, guitarist Jim Mullen. Palmares Fantasy is an instrumentally focused album, but vocals are an important element of several tracks, notably the opener, "Moment Of Collapse." Khan's meditation on the instability of modern Western civilisation, the piece is gorgeously sung by Vogel over a richly arranged string-section and Alice Coltrane-like harp. Seven of the nine tracks are Khan originals. The other two tunes are Pascoal's lovely "Montreux" and an uplifting soul-jazz take on Milton Nascimento's MPB classic "Tudo Que Voce Podia Ser," sung by Malheiros. Palmares Fantasy is the sound of summer—with an edge.