By Eyal Hareuveni
January 29, 2012
Sign in to view read count 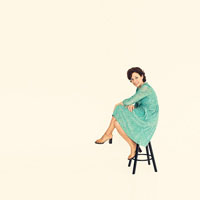 Few artists can evoke poetic musical images of such strong and diverse personae as Brazilian singer, composer and political activist Caetano Veloso, Spanish poet Federico García Lorca, French impressionist composer Claude Debussy, American author Paul Auster, American innovative architect Frank Lloyd Wright, Swedish actress Ingrid Bergman and Persian Sufi poet Jelâluddîn Rumi on a single album. Few could manage to wrap these fascinating characters with an engaging, left-of-center musical outfit. But Swedish singer/composer Lina Nyberg is indeed a unique artist. She has a vivid imagination, knows how to compose, arrange and perform a song-story, and explore its dramatic elements by injecting the right dosage of pathos and humor—and always with elegance and grace. She also has the wisdom to find the right musical companions, some who have accompanied her for several years.

Palaver is a series of short musical tributes to the famous ones cited above as well as Nyberg's relatives. She begins with the playful, rhythmic "Ditte," a set of heartfelt promises to her daughter. The Brazilian Tropicalia feeling of "Caetano" sets the right atmosphere for a theatrical fantasy about a humid meeting with Veloso. Nyberg shines with the comic self-portrait of "Adrenalina," introduced by trumpeter Emil Strandbrerg's beautiful solo. The singer references García Lorca's "Song of the Horseman" in her dramatic tribute to the poet, enhanced by David Stackenäs' slide guitar and an erupting baritone sax solo from her partner, Fredrik Ljungkvist.

"Aliisa" is a sad lament about the tragedy of wars from the perspective of the women left behind, emphasized by a choir of young female singers. Stackenäs adds his own impressionistic playing to the impatient, imaginative tribute to Debussy, "Claude." On "Paul," her tribute to Auster, Nyberg tells an arresting story—similar in spirit to those of the author—about how a surprising coincidence can turn our lives. Her cover of Paul Simon's tribute to the unique architect, "So Long Frank Lloyd Wright," is sparse, capturing Simon's simple beauty and performed in a duet with Stackenäs on acoustic guitar. "Ingrid," her homage to Bergman, attempts to reconstruct the actress' fleeting but glamorous life, with Stackenäs' scorching electric guitar solo shattering any temptation to lead such a life.

Nyberg concludes this remarkable album with a thoughtful reading of "Jelâluddîn," a poem by Coleman Barks dedicated to the Sufi poet. Nyberg is accompanied by a choir of three bassists, who add a deep resonance to the poetic words.