By Nenad Georgievski
January 29, 2012
Sign in to view read count 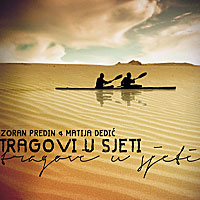 After spicing his solo career with diverse and strong material following his front-man work with Lačni Franc, Slovenian singer-songwriter Zoran Predin turns his attention to some great tunes from the golden age of Yugoslavian pop music on Tragovi u Sjeti. Joined by one of Croatia's most celebrated jazz talents, pianist Matija Dedić, this is a collaborative effort where musical cultures, styles, eras and personalities are utilized, fused and juxtaposed to marvelous effect.

The record is a generally quiet affair, with a sense of introspective reflection. Zoran Predin is a crooner who knows how to express tenderness without sentimentality, thus giving these songs a chilling beauty. He shows great understanding of the songs he sings without overdoing it, and the songs are better for it. On the other hand, Matija Dedić is a fruitful composer with several albums behind him, his discography including albums featuring jazz covers of some of Croatia's greatest songwriters—Gibonni, on Tempera (Dallas Records, 2002), and Drugi Pogled (Dallas Records, 2005), with songs by the pianist's father, Arsen Dedić, one of the most celebrated Croatian/Yugoslavian songwriters of all time whose work has encompassed different eras, generations and countries. One of the links between Matija Dedić and Zoran Predin is actually the elder Dedić with whom Predin has worked in the past and has recorded Svjedoci Priče (Jugoton, 1989). Naturally, they included a song of his "Tvoje Nježne godine."

The choice of songs includes works by celebrated songwriters and interpreters like Goran Bregović, Đorđe Balašević, Zdravko Čolić, Oliver Dragojević, Parni Valjak and Josipa Lisac—all well known as well—and a song that Predin wrote for Croatian singer Massimo Savić, "Šta bi mi bez nas." The choice of material is not accidental and this stripped-down approach has not wiped out the history that goes with the songs. The common denominator is the emotions and beautiful, simple melodies. Most of the time Dedić acts as an accompanist, with only the occasional piano break hinting at the scope of his talent.

Historically speaking, the music of former Yugoslavia was a world of its own, a deep well with all kinds of genres, bands and artists that had huge followings and enthusiastic audiences across many generations. Generally speaking, that age fostered a fertile artistic and cultural exchange that affected various other fields. Sadly, those achievements were overshadowed by its recent dark history, with its violent breakup at the beginning of the '90s. That era is often looked upon as a golden age, and was (and still is) expressed through its music. Typically, societies are constantly subjected to periods of equilibrium and turbulence which is best expressed through the notion of Golden and Dark ages. Most often, that aspect of nostalgia and lamentation is turned into merchandising, but despite its nostalgic comforts, Tragovi u Sjeti is far from nostalgia marketing; instead, it's an honest and heartfelt musical document, where fine musicianship really does justice to these songs.