Gary Versace: Outside In 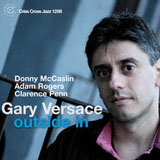 Coming in on the most recent wave of popularity for the Hammond B3 organ, Gary Versace has quickly established his reputation on the New York scene. A versatile and chameleon-like musician, Versace's approach to the instrument is unique in that he strives for his own sound, while avoiding the copycat sounds or runs of such modern icons such as Jimmy Smith or Jack McDuff. Most recently, he has brought much of his talents to the fore working with drummer Matt Wilson's Arts and Crafts ensemble.

His first session as a leader for Criss Cross, Outside In finds Versace leading a quartet with saxophonist Donny McCaslin, guitarist Adam Rogers, and drummer Clarence Penn. While the line-up may suggest your typical greasy organ combo record, nothing could be farther from the truth. In fact, all of the pieces are Gary's originals and each one taps a different groove or mode of exploration. Like many of his contemporaries, Versace is not afraid to let the shape of melodic phrases dictate the structure of his originals. This means that a piece like "The Grand Inquisitor" flows along with deceptive ease, even though it's built upon a challenging combination of odd meters.

A number like "Blue Soap" is certainly basic in its form, yet Versace chooses a Tristano-esque lead for sax and guitar. McCaslin is a real asset throughout, heard on both tenor and soprano, the latter heard to particularly good advantage on "A Thousand Words." Of course, it goes without saying that Rogers is perfect for this type of recital. A veteran of many forward-thinking units including Chris Potter's Underground, the guitarist compliments any group through his unique sounds and comping. Drummer Penn is also quite organic in his approach and it would be hard to imagine a better-suited drummer for this music.

Although there's an introspective quality to some of these pieces that can lead to a sense of blandness at times, it's encouraging to find a musician like Versace who is not afraid to stretch beyond the tradition in an effort to find his own muse. It might have been interesting, however, to revisit a few standards by coming up with some novel new arrangements.