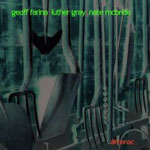 Guitarist Geoff Farina, founder of the seminal 1990s indie rock band Karate, has been slowly but surely woodshedding his collegiate jazz chops. Karate was a far more progressive, improvisational ensemble than its fellow emo brethren, and Farina's augmented jazz chording foreshadowed greater things to come. His simultaneous stint in the folksy Secret Stars provided him with an opportunity to stretch dynamically in an acoustic setting. These two sound worlds have yielded a far different crop of music than his early admirers could have foreseen.

Together with guitarist Dan Littleton, Farina and Gray collaborated on 2004's New Salt (Xeng). That album's dark, feedback-drenched beauty is similarly expounded on here, but this date embodies a far more introspective feel.

There are moments of heightened intensity, like the shimmering aggression of "Steam Piracy." But more often than not, the trio settles into languorous rubato modes, with Farina caressing bluesy, lyrical refrains while McBride bows sumptuous arco melodies, as on "Sonic Gobo."

Each installment of the Out Trios series differs from the last, and Almanac is no exception to the rule.