Joachim Kuhn / Majid Bekkas / Ramon Lopez: Out Of The Desert 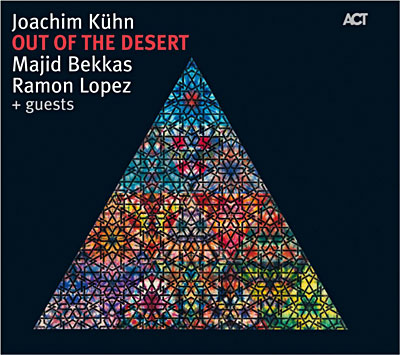 Boundary busting and inventive though it was, Kalimba (ACT, 2007)—the first album by German pianist Joachim Kuhn, Moroccan vocalist and guembri player Majid Bekkas, and Spanish drummer Ramon Lopez—ultimately felt like Kuhn's album more than a fully integrated, cross-cultural group exercise. Two years on, the trio's second outing, Out Of The Desert, offers a deeper mix—and an altogether more absorbing one.

Kalimba was recorded in Germany. For Out Of The Desert, the trio travelled to Morocco. In the regional capital Rabat, they teamed up with three local adepts of gnawa, a Moroccan trance music with roots in black Africa south of the Sahara. In the remote desert town of Erfoud, they recorded with five Berber drummers and percussionists.

As the recording locations and guest musicians suggest, Kuhn, Bekkas and Lopez were aiming for a fundamentally Moroccan fix to the sessions. And boy, did they deliver. There are six tracks on the album, and on the four featuring the expanded line-up, the group dig deep into traditional Moroccan music, with the tunes—two by Bekkas, two by Kuhn—based on a generic trance aesthetic. At the bottom are Bekkas' percussive bass register ostinatos on the guembri (a kind of lute). At the top are the insistent iterations of the karkabou (hand-held cymbals). There are call and response vocals and, a signature element of Maghrebi trance music, the use of accelerating tempos once a tune has passed the halfway mark. On top of all this lies Kuhn's piano, at times funky and lowdown—like that of longtime Moroccan resident and musical disciple, American pianist Randy Weston—at others more free and atonal, true to Kuhn's "diminished augmented system" (that's "minor keyed" in plain English).

The two remaining tracks feature the Beninese vocalist and talking drum player Kouassi Bessan Joseph, and add a more pronounced sub-Saharan flavor to the music. On Kuhn's "One, Two, Three," at 12:29 the longest track on the album (the others average about eight), and the one with the clearest "jazz" provenance, further diversity is injected via Bekkas' kalimba and Lopez's tabla—and an extended, free improv section featuring Kuhn on alto saxophone.

As befits trance music, Out Of The Desert is visceral and simple in structure, although some of the rhythms may at first sound complex to ears not attuned to North African music. All the more reason to check this music out—it's jazz, Jim, but not as most people, at least in North America, know it. We're going to hear more of this sort of genre-mashing in jazz, from all over the world, in the future. Bring it on.